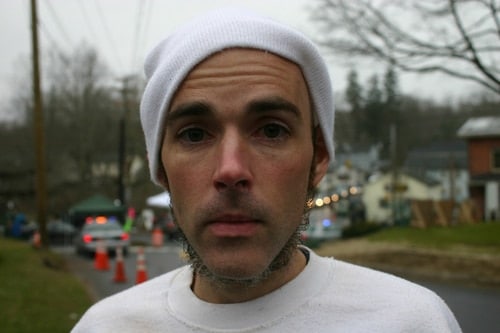 Jonathan Lee Riches shaves his face, but grows facial hair around his neck and under his chin.

A former prisoner known for filing phony lawsuits is back to his old shenanigans, this time attempting to obtain a restraining order against former LA Clippers owner Donald Sterling and the National Rifle Association.

According to The Smoking Gun, Jonathan Lee Riches penned the complaint under the name “Elliot Roger Zimmerman” on June 2 and claimed that he feared Sterling would “lose his marbles and go postal, shoot blacks, and kill humanity.”

“Sterling has been a proud member of the NRA for 40 years and has a cache of weapons in his arsenal, and he’s raging mad with hate,” the complaint reads.

Riches served a 10-year sentence in a Pennsylvania prison for wire fraud. He’s been filing phony lawsuits since 2006 that contain comical or satirical messages. More recently, he’s targeted both famous and infamous figures with hopes of making the news. He’s sued everyone from the President to Kim Kardashian to himself.

The pen name is presumably a combination of the University of California-Santa Barbara shooter Elliot Rodgers and George Zimmerman.

In addition to the Sterling/NRA complaint, Riches filed a sexual harassment suit against actress Gwyneth Paltrow and Sterling under the name Chris Martin, but not the Chris Martin married to Paltrow.

While a judge tossed out the Paltrow/Sterling case, the Sterling/NRA suit is still pending.