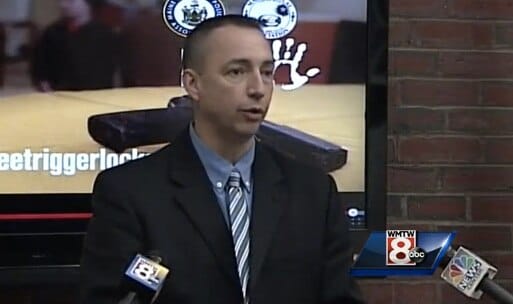 If you own a firearm, should you also own a trigger lock?

Well, for those Maine residents who answered “yes” to that question, police across the state are giving away free trigger locks.

Money for the locks was raised by the pro-gun control organization Maine Citizens Against Handgun Violence, which generated $20,000 in donations to purchase 5,000 trigger locks all of which were given to more than 40 police departments.

“If you can’t get at a trigger mechanism, the firearm in a vast majority of times is not going to discharge, it’s not going to fire,” said Portland Police Chief Michael Sauschuck, at a Thursday press conference.

“So when we talk about safety for our kids and our families in our homes, right here in the city of Portland, right here in the state of Maine, a simple system like trigger locks is certainly something that everybody should be able to get on board with,” said Sauschuck.

Sauschuck stressed how the trigger locks are something that everyone can get behind, regardless of their views on gun control.

“In the middle there are a lot of pieces of legislation and common sense approaches that we can all get on board with,” said Sauschuck. “Trigger locks are one of them. Thousands of people are injured and killed every year by the unintentional accidental negligent use of firearms.”

Ladd Everitt from the Coalition to Stop Gun Violence was encouraged by the free-trigger lock campaign, but said that the nation’s gun lobby has blocked Congress from enacting laws to make the mandatory.

“Having the police distribute free trigger locks to citizens who want them is a terrific idea, said Everitt, the group’s communication director in an email to Guns.com.

“Legislators caving to the NRA and absolving citizens of any responsibility to have to actually USE those trigger locks to keep their guns out of the hands of children and other unauthorized users? That’s a terrible idea, and it’s cost many lives in this country,” continued Everitt.

Lawrence G. Keane, the senior vice president, assistant secretary and general counsel to the National Shooting Sports Foundation (NSSF), the firearms industry trade organization, was critical of the safety device in which the gun-control groups opted to give away, indicating that there are better ways to get the job done.

“In typical fashion, non-gun owners who want to be safety experts choose to distribute trigger locks over cable locks even though the latter leads to a more safety secured firearm,” said Keane in an email to Guns.com.