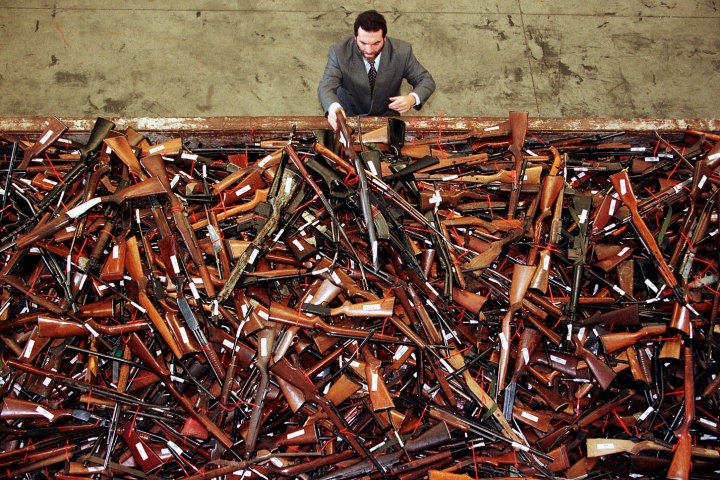 An Australian police official inspecting a pile of about 4,500 prohibited firearms that had been handed under the Australian government’s buyback in Sydney in 1997. (Photo credit: David Gray/Reuters)

President Obama has repeatedly hailed Australia’s 1996 gun ban as a model for gun control. However, critics from the land down under are opening up.

During a recent Q and A session with Tumblr founder and CEO David Karp, the President referenced the country’s harsh gun ban, saying “A couple of decades ago, Australia had a mass shooting … and Australia just said, well, that’s it, we’re not seeing that again. And basically imposed very severe, tough gun laws.”

This echoed a similar remark made in September 2013 following the Washington Naval Yard mass killing by the President.

“In the United Kingdom, in Australia, when just a single mass shooting occurred in those countries, they understood that there was nothing ordinary about this kind of carnage,” Obama said nine months ago. “They endured great heartbreak, but they also mobilized and they changed, and mass shootings became a great rarity.”

With these comments voiced not once but twice by the leader of the United States, some Australians were puzzled by the reference.

“The ‘success’ of the 1996 Australian gun reform is a myth,” penned Australian Nick Adams, a conservative writer and motivational speaker, in an open letter posted on Joe for America. “The only thing achieved was to take away the guns of the law-abiding, leaving only the criminals armed. Is this what you wish for America?”

During the enactment of the law, the government bought back nearly 700,000 guns, but whether or not it had a positive affect is still up for debate. Statistics show that violent crime remained steady, the murder rate dropped slightly and gun deaths had reduced, but the flow of illegal guns has risen along with assaults and murders by stabbing. While technically there hasn’t been a mass shooting since the measure passed, there are accounts where a gunman opened fire in a public place.

In 2002 at Monash University in Melbourne, a mental impaired gunman shot seven people, killing two of them. Afterward, the government expanded controls over semi-automatic handguns, buying back some 50,000 handguns then deemed illegal.

During this period, the Australian military divested itself of large stockpiles of surplus small arms, with lawmakers taking great steps to prevent the guns from passing into the hands of local collectors. This included the export of more than 100,000 Lithgow-made Short Magazine Lee Enfield rifles to the U.S. and the destruction of 110,000 Australian L1A1 (semi-auto only FN FAL) rifles in 1994.

Adams, who currently lives in the U.S., said he believes that gun laws achieve very little. “Mass shootings are about illness, not guns. Any other so-called ‘gun issue’, if there are any, is related to the breakdown of the family, cultural decline, and the age of entitlement.”

The effect on crime and punishment in the south Pacific country is also a matter of debate.

The Sporting Shooters’ Association of Australia, the largest gun rights group in the country, has long held that the 1996 gun laws and those passed since then have had a negligible effect on safety and firearms death.

Although some studies maintain that there was a decline in gun deaths, particularly suicides, in the country following the 1996 legislation, a 2008 report by the University of Melbourne that analyzed firearms deaths for a period of 100-years in Australia concluded that the new laws did not have any significant effects on firearm homicides and suicides.

Others contend that any decrease in gun deaths is societal related and not due to strict gun control.

“The full truth is that Australia’s close neighbor New Zealand – a country very similar to Australia in history, culture, and economic trends – has experienced an almost identical time period with no mass shooting events despite the ongoing widespread availability of the types of firearms Australia banned,” David Leyonhjelm, a Liberal Democratic Party member of the Australian parliament, wrote in a piece for the Australian Finance Review.

In an email to Guns.com, Leyonhjelm said, “The gun laws have made no difference to the level of homicides, up or down. Their impact on suicides is less clear, but there has probably been no impact apart from method substitution.”

The lawmaker was clear that the gun ban in his country was not a magic wand for ending mass killings.

“There have been no mass shootings since the gun laws were introduced, but New Zealand has had none either and it didn’t follow us,” Leyonhjelm said. “On the other hand, we have had several mass murders using other methods (principally fire).”

In closing, Leyonhjelm contends that the Australian model is a flawed one. “The bottom line is we are suffering under draconian gun laws that treat us like criminals in waiting, with zero public benefit but substantial public cost,” he said, adding. “If President Obama genuinely believes Australia offers a model for reducing firearm crime or suicides, he is seriously misinformed.”