Supernumerary robotic limbs, SRLs, or extra arms just like Doctor Octopus are becoming a reality thanks to researchers at MIT.

The idea it to make things that would be impossible or at least a pain in the rear possible with the help from some waist- or back-mounted arms, like opening doors while carrying an armload. These aren’t prosthetic limbs, they’re extra-thetic.

Right now they’re working on making the arms easier to control and smarter about how they interpret user commands. 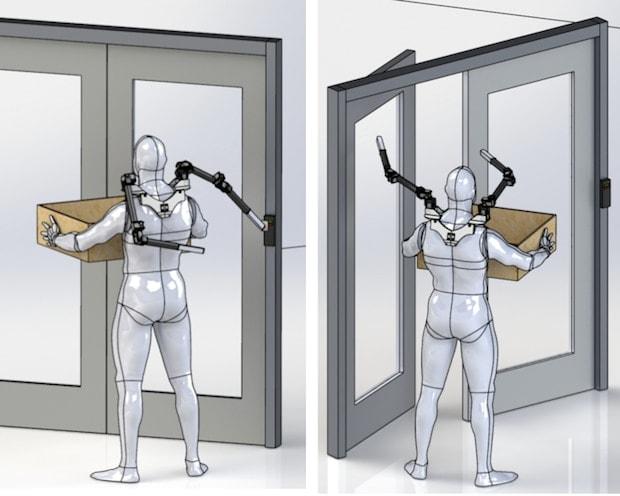 The arms will adapt their programming through “demonstration learning,” and tailor their operation to what the user is likely to request them to do. (Photo credit: MIT d’Arbeloff Laboratory.)

The SRLs use gyroscopic sensors along the user’s spine and in a pair of bracelets to detect what the user is doing and combines that data with its programming to determine the best course of action. This logic is called “behavior modes” and is probably the biggest hurdle the team has still to overcome.

“Once we combine the most significant behavioral modes we are able to control the robot such that, from the wearer’s perspective, it behaves like an extension of his own body,” says Baldin Llorens-Bonilla, a researcher at the d’Arbeloff Laboratory at MIT.

A chunk of the project is sponsored by Boeing who is looking for a way to help prevent work-related injuries from lifting, crouching and bending over. Because the limbs are articulated at the waist, they can be extra arms or extra legs and can also be used in a pinch as a portable stool.