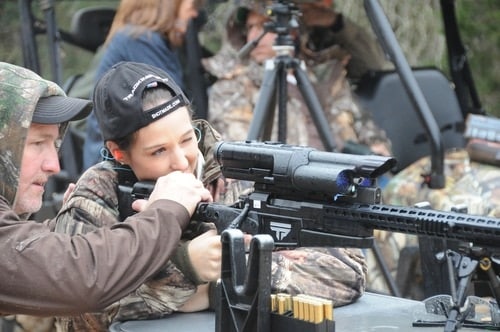 The TrackingPoint range on Father’s Day.

To further solidify itself as a player in both the tech world and gun industry, TrackingPoint, the creator of the first precision guided firearm system, raised $29 million in its Series D financing round on June 13.

TrackingPoint plans to use the capital investment for marketing and development. More specifically, the company aims to develop products that meet price points both above and below its current scale starting at $10,000, explained Oren Schauble, TrackingPoint marketing director.

Closing on the Series D financing round allows TrackingPoint to continue to grow while it prepares to enter the final stage of its business model, which may end with an acquisition, a management buyout, a leveraged buyout or an Initial Public Offering.

However, TrackingPoint hasn’t decided exactly what just yet. “We’re not in a rush for an IPO or acquisition. We’re just going to wait for the best possible option,” Schauble said.

The investors mostly come from the company’s home state of Texas, but also includes several customers turned angel investors who were simply inspired by the product.

TrackingPoint’s PGF allows shooters to accurately hit whatever they want at ranges out to 1,200 yards. The system relies on a computerized scope loaded with features and is hardwired to a rifle. To use it, a shooter locates and tags a target with the software programmed into the scope. With a target tagged, the user must depress the trigger and hold it until the reticle inside the scope realigns with the tag. Once it’s everything aligns properly, the round fires.

Since launching in 2011 and official release in January 2013, TrackingPoint has expanded its facilities, gotten praise for innovation, fired its management, began talks with the military, and released new products, including a more affordable bolt-action rifle and AR-15.

The Wall Street Journal reported that TrackingPoint earned $10 million in revenue in 2013 and expects to do $20 million this year. With the recent round of funding, the company was valued at more than $250 million post-money.