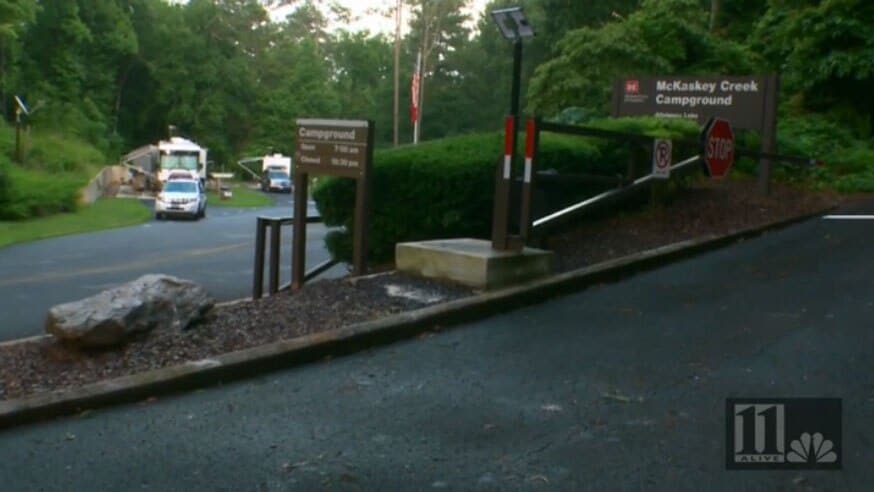 Although new Georgia legislation will go into effect July 1 expanding the areas in which a firearm can legally be carried, those areas do not include the land owned by the U.S. Army Corps of Engineers. (Photo credit: 11 Alive)

A Georgia man is suing the U.S. Army Corps of Engineers over the right to carry his handgun at the Lake Allatoona campgrounds where he frequently takes his family for weekend getaways.

Possessing firearms on the federally-owned property is normally prohibited, except under certain conditions, such as law enforcement officers or individuals who are on the land to hunt. Others are also allowed to carry guns under different circumstances as long as they have prior permission from the district commander.

But when the former police officer and military vet with a valid carry permit requested permission in May to also be allowed to keep his firearm with him on the campgrounds, David James was promptly denied and given no reason why.

“When I’m camping here and I camp in my tent, I want it for the same, exact reason I have it at my home,” James told local media, “For self-defense.”

James’ attorney, John Monroe added, “When someone is camping in a tent or otherwise, that tent is their home for that period of time.”

And according to James, it’s more than just a fear that he or his family could become the victims of a crime. There is potentially dangerous wildlife in the area to consider as well.

“It’s my Second Amendment right,” James told the Atlanta Journal-Constitution. “Especially while camping, there are lots of people out there and I want it for self-protection. There could be snakes and animals and people are drinking at those campsites.”

But regardless of what dangers may lurk at the lake, James feels he was denied his right to self-defense and essentially his Second Amendment rights, prompting him and the gun rights group Georgia Carry to file the lawsuit last week requesting that the Corps be prohibited from banning firearms on the premises.

“I anticipated that they would deny it,” James said. “I would have been surprised if they had (approved his request). They probably think they’re opening a can of worms if they do (allow guns).”

According to Monroe, if James’ lawsuit is successful, the decision would affect all 8,000 members of Georgia Carry and would apply to all of the area lakes owned by the Corps of Engineers.

A similar lawsuit was recently filed in Idaho and although the suit has not yet been settled, a federal judge did rule that the Corps could not have a ban on firearms in place, at least until the full hearing, which is currently scheduled for August. A decision which Elizabeth Morris and Alan Baker – who filed the suit – feel has “shown a very strong likelihood of success.”