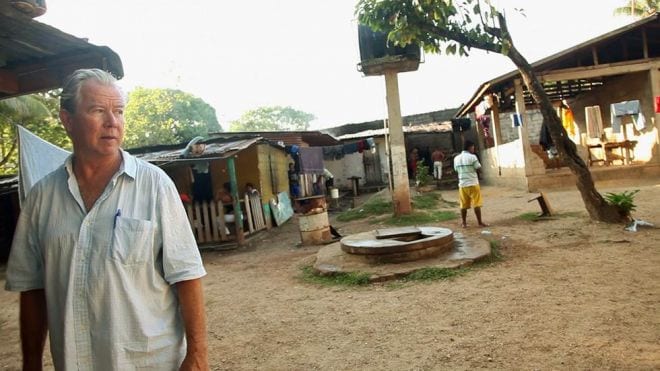 Captain Robert Mayne looking around the primitive prison yard in Puerto Lempira, Honduras, where he and five other Americans have been jailed since May 5 on weapons charges. (Photo credit: Michael McCabe)

Approximately $5,200 has been raised in an attempt to free six divers from Aqua Quest International, jailed since May in Honduras on gun charges they contend are bogus.

The Americans were arrested following a late night boarding of their U.S.-flagged vessel by the Honduran Navy, which found firearms stored aboard. The Tarpon Springs, Florida-based company maintains that the guns were for protection in drug-smuggler infested waters and deny violating any laws.

“We initially thought it would be over as fast as it started because they broke no laws,” said Stephen Mayne, brother of the company’s president, Capt. Robert Mayne, who is one of those held.

Besides the captain, the other five crew members are Michael Mayne Sr, Nick Cook, Devon Butler, Kelly “Boo Boo” Garrett, and Steve Matanich, know together as the “Aqua Quest Six.”

A Go-Fund-Me site, set up earlier this month, has raised some $5,200 in donations for legal fees in an effort to free the crew.

Though, it is estimated the campaign will cost over $18,500.

The Aqua Quest team was on a pre-arranged undertaking for the small Miskito Indian town of Ahuas to improve local lobster fishing in the area. Although Ahuas has a history of violence due to drug activity, and the U.S. Embassy has a travel warning for U.S. citizens in the country that states, “Since 2010, Honduras has had the highest murder rate in the world,” Aqua Quest argues the weapons were for protection while on the high seas and would have been declared when clearing local customs. 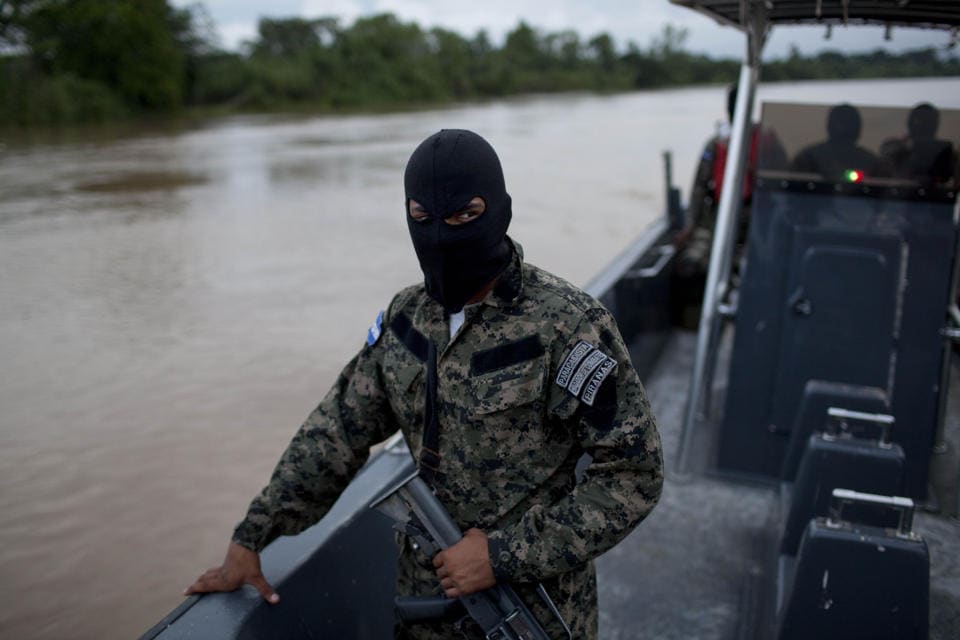 The Honduran Navy, seen here near Ahaus, extensively patrols the remote area of the country the Aqua Quest crew found themselves in. (Photo credit: Rodrigo Abd/AP)

“The captain, off the Yucatan, has had to deal with people trying to board the boat,” said filmmaker Michael McCabe, who has been working with Aqua Quest and was on the boat at the time of the raid. “He’s had experience with pirates. The only thing that will hold them off is if they see weapons.”

The United National Convention on the Law of the Sea allows ships in international waters to observe the laws of their origin, meaning that U.S.-law would govern the possession of guns on the Aqua Quest while on the high seas. However, once in the territorial waters of another country, that nation’s laws would apply.

“According to the USCG Vessel Documentation website, the Aqua Quest is a USCG-documented research vessel owned by  Aqua Quest International of Tarpon Springs,  which clearly establishes this vessel as a US Flagged vessel,” Robert L. Gardana, an attorney experienced in maritime law told Guns.com Tuesday by email.

Gardana, explained that the case of the Florida salvage divers is a double edged sword.

“A tragic irony exists between the right of a US-flagged vessel to bear arms on international waters for self defense purposes versus entering specific ports in Central America, including Honduras,” explained Gardana.  “When it comes to vessel protection against piracy, the USCG reports a reduction in successful attacks, which can be attributed, in part, to the use of self-protection recommended by the shipping industry  But, vessel owners and crew entering the Country of Honduras must be aware that Honduras regulates the type of permitted weapons imported and requires prior approval of all firearms on board, under the Act on the Control of Firearms, Ammunition, Explosives and Other Related Materials enacted in 2002.

“According to the embassy, firearms that arrive without the required Honduran permit will be confiscated and the bearer will be prosecuted to the full extent of Honduran law,” said Gardana.

Nevertheless, the Aqua Quest crew believes they did not have a chance to declare the guns they had on board to local authorities in Honduras, arriving at Puerto Lempira after the port authority had left for the day.

Before the next morning, on May 5, the Honduran Navy and local law enforcement boarded the ship and discovered the guns, which included two handguns, two shotguns and a Zastava M-70AB2 rifle. The latter, a semi-auto modern sporting rifle, was classified as an AK-47 by Hondurans, which is prohibited in the country.

Imprisoned indefinitely, an appeals court in Honduras is scheduled to hear the case of the Aqua Quest Six sometime next week.

“We’ve done everything we can,” Gustavo Arguello, the crew’s Honduran attorney said. “Now it’s in their hands. They could go free, or they’ll be sentenced.”