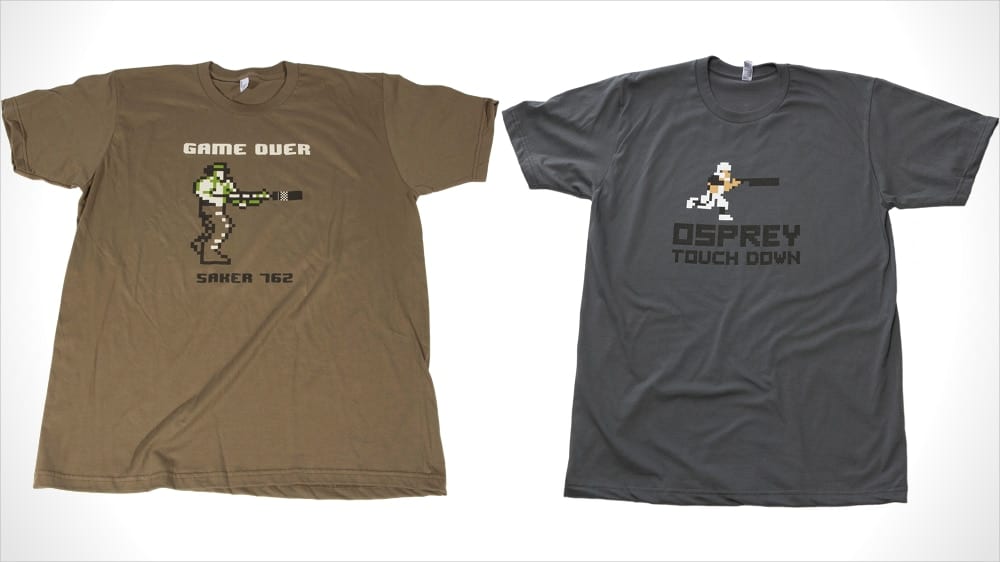 Silencerco, a pillar of the modern firearms community, is raising awareness and funds for Operation Supply Drop with a series of limited-edition 8-bit T-shirts.

Operation Supply Drop is a non-profit charity group with a simple goal: to put more video games in the hands of our soldiers. With the motto “Make fun where there is none,” Operation supply drop brings entertainment to forced deployed in high-risk combat zones as well as to medical facilities for recovering troops.

Combating boredom and giving deployed forces some much-needed fun and games is their mission and Silencerco is backing the project with video game-themed T-shirts. For every shirt sold Silencerco is donating $5 to Operation Supply Drop.

The company put together four designs based on old games: Attack, Fire, Touch Down and of course, Game Over. Each tee also prominently features a Silencerco suppressor, its Saker, Osprey, Harvester and Specwar.

With these tees you can prominently show your lover for Silencerco and the 8-bit generation while supporting a fantastic charity, even if it’s a little under the radar.

Another nice thing about these designs is that they’re pretty low-key. Anyone who’s not into the NFA scene will probably just assume they’re video game shirts and not gun-related. You can wear these on casual Fridays without having that conversation, if that’s a concern of yours.

During the last fundraiser Operation Supply Drop was the target of a DDoS attack that shut down its ability to accept donations. The charity drive was repeatedly interrupted throughout its run. They still managed to raise over $300,000, calling the drive a success despite its troubles.

Operation Supply Drop accepts monetary donations online, in addition to the annual fundraiser, if you want to contribute directly. The program also takes in video game donations all year ’round. If you want to send in some gaming hardware, you can ship consoles and games directly to them here.

Operation Supply Drop is accepting Xbox 360, Playstation 3, Wii, Wii U, Xbox One, Playstation 4, Playstation Vita, Playstation PSP and Nintendo 3DS consoles and games, new or used (as long as they are in working condition).