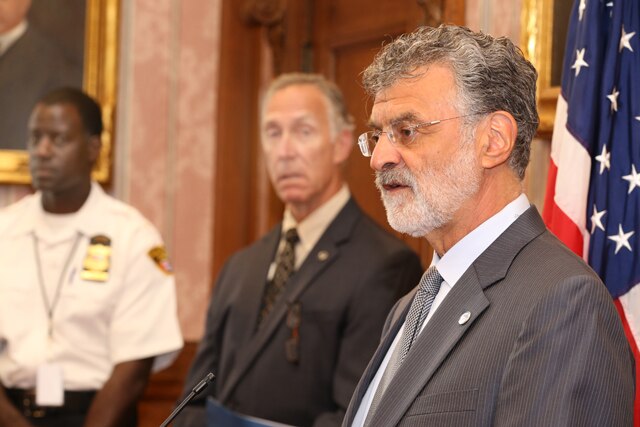 Mayor Frank Jackson announced Tuesday a plan to combat gun violence in Cleveland that would include a gun offender registry, rationing purchases and other controversial measures.

He stated in a press conference that the multi-tiered approach was designed with consultation from the city’s attorneys in an effort to overhaul existing gun regulations in the Forest City.

“I want Cleveland police and our city prosecutors to have as many ways to address this problem as they can, and this legislative agenda will help get us there,” he continued.

Mayor Jackson’s plan, is a comprehensive attempt at gun control that would establish a gun offender registry to require all those convicted of a gun offense to register with the Cleveland Police Department, much like a sex-offender.

Registration would be in a publicly searchable database that the offender would have to join within 48 hours of sentencing, and update their information annually for at least four years.

Similar controversial registries have been implemented in Chicago, Baltimore and Washington D.C. in recent years.

In addition to this radical new step, Jackson would institute strict gun rationing, limiting firearms acquisitions to one per legal purchaser every 90 days. To put a lid on other firearms transfers, he plans to require the reporting of personal transfers and lost guns to the police as well. Finally, the mayor is recommending prohibitions against improper discharging of guns in the city, and safety regulations targeting households with firearms and minors.

Jackson is a member of Mayors Against Illegal Guns, the gun-control organization founded by former New York City mayor Michael Bloomberg now under the Everytown for Gun Safety umbrella.

These proposals, however, may soon face legal issues.

In 2010 the Ohio supreme court struck down Cleveland’s strict gun laws, stating in a 5-2 decision that the state’s laws on an Ohioan’s individual rights to bear arms preempt the city’s ordinances.

At the time Chris Cox, the head of the NRA’s Institute for Legislative Action, praised the ruling, saying in a statement, “If Cleveland, or any other city, wants to crack down on violence, city leaders there should focus on prosecuting criminals, not enacting new gun laws that only serve to restrict law-abiding citizens.”

The Buckeye Firearms Foundation, an Ohio-based gun rights group, is already promising litigation on the issue if needed.

The mayor’s proposals will be presented to the council at their July 16 meeting.