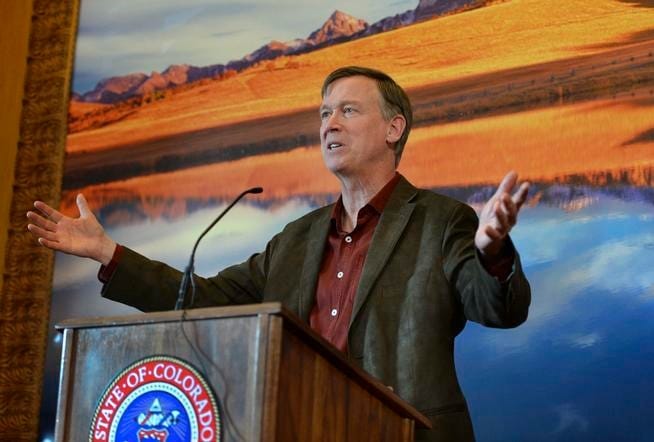 Last Friday Gov. John Hickenlooper told a group of Colorado sheriffs that he did not speak with former New York City mayor Michael Bloomberg prior to signing controversial gun-control bills into law last year, though this week a spokesman for the governor clarified the matter, admitting that Hickenlooper did indeed talk to the Billionaire media mogul.

The question of Hickenlooper’s discussion with Bloomberg during the heated debate over gun control spurred by the mass shooting at Sandy Hook Elementary School in Newtown, Connecticut, was posed by Weld County Sheriff John Cooke, who wondered why the Democratic governor evidently heeded the input of an out-of-state, big-city politician over the advice of top law enforcement officers sworn to protect and serve Coloradans.

“Well, let’s, let’s stick to the facts,” Hickenlooper told the sheriffs Friday. “I never talked to Mayor Bloomberg. I…Again, that’s been out in the press and all this stuff. Just for the record. You know, I met Mayor Bloomberg when I was a Mayor, and I know him, uh, I think he’s a pretty good Mayor.”

Yet, phone records released by the governor’s office clearly indicate that Bloomberg did indeed talk with Hickenlooper, leaving his office to explain the apparent contradiction.

“The governor often jokes about his ability to put his foot in his mouth, because he does,” said Eric Brown, a spokesman for the governor to Fox 31 Denver. “It is well established that Gov. Hickenlooper spoke with Mayor Bloomberg, as well as NRA President Keene and many other stakeholders in the gun safety debate. In fact, the governor released phone records on this matter.”

Brown then went on to claim that what Hickenlooper meant to say was that his conversations with Bloomberg had no bearing on his decision to sign two gun-control bills into law, one that banned magazines that hold more than 15 rounds of ammunition and another that required universal background checks for all private gun transfers.

“When the governor told an audience of sheriffs that he had not talked to Bloomberg, the governor was attempting to convey he never had a conversation with Bloomberg that influenced the decision he made,” explained Brown. “In no way did the governor intend to mislead the sheriffs or anyone else.”

While supporters of the governor may be inclined to buy into that explanation, those hoping to unseat Hickenlooper in the 2014 gubernatorial race were not so easily persuaded.

“It’s unbelievable that this governor would steal the Liberty of Coloradans and then apologize – not for the taking – but the outpouring of anger from both sheriffs and law-abiding Coloradans,” said U.S. Rep. Bob Beauprez, who represents Colorado’s 7th Congressional District.

“This is a governor without leadership or principle. He decides to restrict the rights of Coloradans and months later apologizes for not doing his homework,” added Beauprez, who is hoping to win the GOP primary and run against Hickenlooper this fall.

“John Hickenlooper has a complete lack of respect for the majority of Coloradans and our Colorado County Sheriffs,” chided Gessler.

What are your thoughts? Did Hickenlooper attempt to mislead Colorado’s sheriffs or did he just make a simple mistake?