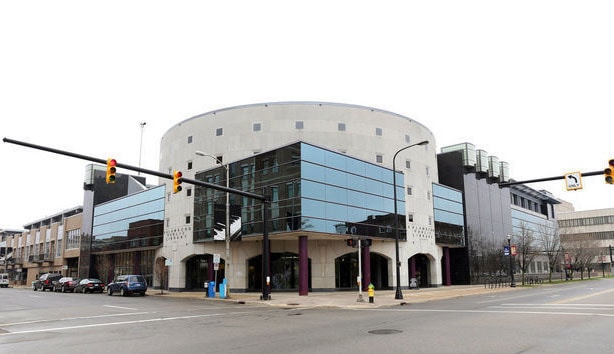 Should libraries such as this be designated as gun-free? (Photo credit: MLive)

A children’s event in the parking lot of a Kalamazoo library last Saturday went awry for one family when the father was asked to leave by library staff after they noticed the man was carrying a holstered handgun, stirring a debate over whether libraries should be added to the list of gun-free zones.

“We’re under instruction from police to call them whenever we see someone with a gun, so we did,” Kalamazoo Public Library Director Ann Rohrbaugh told MLive. “In the meantime, one of our administrators told the man that we’d like him to leave.”

Library staff first approached the man and asked why he was carrying a firearm, but apparently unsatisfied with his answer, he was then asked to leave. However, the father, knowing that he was well within his legal rights, refused to do so.

“The man declined to leave, and he said he had the right to carry his gun,” Rohrbaugh said, adding that the man’s wife convinced him to leave before police arrived.

But the man, whose name has not been publicly released, only left the library parking lot and went across the street. When police arrived, he returned to the library parking lot to talk with the officers. Although the police did confirm that he was within his legal rights to open carry at the public library, they also confirmed that they still wanted to be contacted if library staff saw anyone with a gun, Rohrbaugh said.

“But just because something is legal doesn’t mean it’s the best idea,” said Gail Madziar, head of the Michigan Library Association, who also believes that libraries should be gun-free zones. 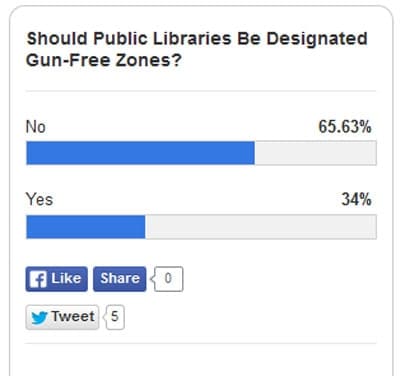 According to a CBS poll, a majority believe that libraries should not be gun-free zones. (Credit: CBS Detroit)

In fact, the Capital Area District Library and the gun rights group Michigan Open Carry were involved in a 2011 court case in which the CADL was attempting to ban firearms in libraries. However, the legal system ruled in favor of Michigan Open Carry and the Michigan Supreme court refused to hear an appeal from the CADL in November.

Nonetheless, Rob Harris, Michigan Open Carry spokesman, calls the Kalamazoo library staff’s response to the gun-toting father last weekend unacceptable and he feels that the man is owed an apology.

But Rohrbaugh feels the man’s actions were inappropriate and said, “We feel you don’t need to bring a gun to the library to protect your family. We feel the library is a safe place. We have security guards. We take safety very seriously, and we have a code of conduct that we enforce.”

However, Harris pointed out, “No place is 100 percent safe.”