Announced a couple of years ago after the adoption of the Beretta ARX-160 rifle by the Italian military, the ARX-100 is the semi-automatic commercial variant of Beretta’s newest fighting rifle. It’s been a long wait but ARX-100s are starting to trickle into gun stores and into the hands of reviewers.

The ARX-160 was designed to meet the specifications of the Italian Future Soldier program, and the only major difference between the ARX-160 and ARX-100 is that the military model is select-fire and the commercial model isn’t.

Beretta’s design is very modern. The ARX makes heavy use of composite materials and polymers in its construction and is very ambidextrous, to the point where the user can even change which side the rifle ejects shells to. The ARX safety selector and magazine release are ambidextrous and the charging handle and ejection port are reversible. 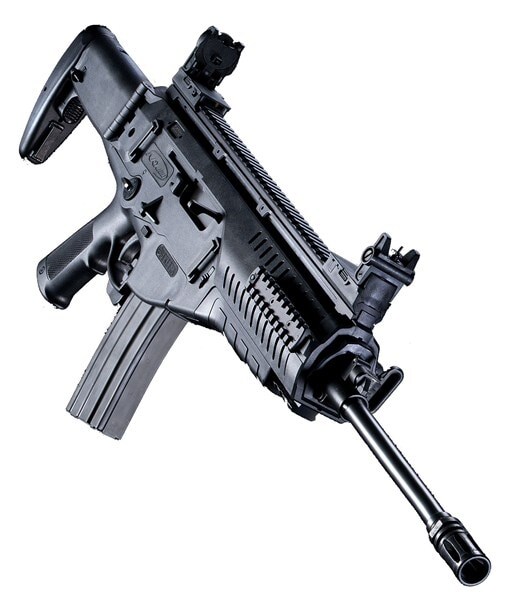 By going with a largely polymer construction, the ARX is extremely resilient and can take abuse that would damage rifles with alloy or steel receivers and possibly even render them inoperable. The ARX doesn’t use polymers to cut weight — it still weighs in at just under 7 pounds, which isn’t heavy but it’s no ultralight rifle.

Another advantage of its use of polymers is that the Beretta ARX requires little lubrication and can even be run dry if necessary.

Like many rifles designed in recent years the ARX is fit with top, side and bottom rails for accessories and the top rail runs the full length of the rifle, meaning special cantilever mounts for scopes are unnecessary. Another modern touch is the use of interchangeable barrels.

The standard ARX-100 barrel is a light profile 16-inch hammer forged, chrome-lined barrel. In the future different lengths, profiles and chamberings may be possible.

The ARX-100 comes with flip-up backup sights, a birdcage-style flash hider and is standard with a folding, telescopic stock. It can be fired with the stock folded.

ARX-100 rifles use standard AR-15/M16/STANAG magazines although they may have problems with some aftermarket mags. MAC over at the Bang Switch found that the over-insertion stop added to Gen 3 PMags prevents them from seating correctly and the shoulders of quad-stack coffin mags won’t fit, either.

That still leaves a huge number of mag options not limited to just GI-pattern magazines including Gen 2 PMags and other popular polymer magazines.

The ARX-100 has an MSRP of $1,950 meaning real-world prices should be about $300 less. That being said we’re seeing them listed and selling for more than MSRP as early adopters are always willing to pay a price premium to get their hands on the latest and greatest.

We expect prices to drop in the coming weeks and months after the initial wave of excitement crests.