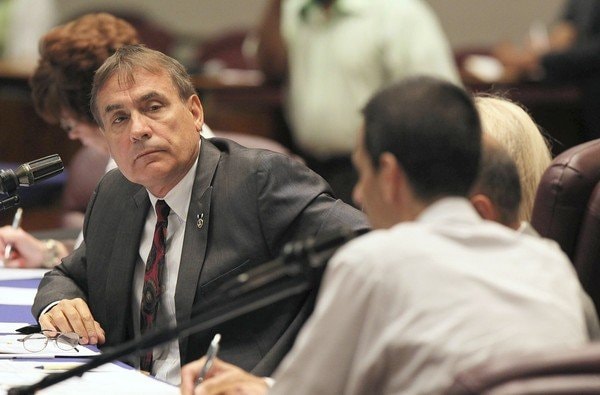 Ald. James Balcer, (11th), who chairs the Public Safety Committee of the Chicago City council, calls the new gun shop ordinance “one of the smartest” in the country. (Photo credit: Chicago Tribune)

Chicago council members who approved the city’s strict new gun shop license program Wednesday call it, “one of the smartest” in the country.

Among the many tenets of the city’s draft would include fees of up to $3,800 per shop, waiting periods on purchases, restrictions on location that would put most of Chicago off-limits, and videotaping sales transactions.

“I don’t think we want these kinds of things in our communities at all,” Ald. Walter Burnett Jr., speaking for many in the council, told DNAinfo Chicago.

Others on the City council’s Committee on Public Safety praised the proposed regulations, with committee chairman Ald. James Balcer calling the package, “one of the smartest, most cutting-edge licensing laws in the country.”

The city had in 2010 practically banned the sale of firearms inside its limits, only to have Federal Judge Edmond E. Chang rule the restrictions unconstitutional this January. Chang then specified that the city have new regulations in place within six months following a request from Mayor Rahm Emanuel.

The 30-page proposal would require bi-yearly fees ranging from $1,100 for a “weapons dealer” who would be cleared to sell stun guns, to $3,800 for firearms dealers. In addition to this, the language of the ordinance would forbid issuing licenses to anyone working from a home, or within 500 feet of a park, school, church, or any building leased to or owned by the city, state, or federal government.

It is believed that this would put some 99.5 percent of the city off-limits to potential gun stores.

While in business, the license holder would be subject to quarterly inspections of their records by the Chicago Police Department, have to submit all employees to a background check by the department, maintain a $1 million liability insurance policy, and comply with a safety plan. All employees would further have to attend mandated training developed by the superintendent of police, with refresher classes conducted every three years.

Firearms sales would have to be videotaped while certain types of ammunition, such as any without a lead core, or in .50BMG-caliber, would be prohibited. In addition to these regulations, there is a mandated waiting period of 72-hours for handguns and a 24-hour period for long arms.

CBS Chicago reported that no gun rights advocates appeared at the committee meeting to speak against the new regulations, calling the conclusion “foregone.”

Nevertheless, Second Amendment supporters in the Land of Lincoln are shocked by the ordinance’s guidelines.

“It doesn’t allow gun shops. It allows them to not be gun shops,” said Richard Pearson, executive director of the Illinois Rifle Association.

One of the bigger issues that draw Pearson’s concern is the mandate to video sales transactions.

“It makes it impossible or undesirable to buy from those gun shops,” Pearson added. “Who knows where those videos are gonna go? We know how tight and secure government is. Your latest firearm purchase may wind up on YouTube.”

The ordinance will go to the full city council on Friday and has to be submitted to the courts by July 14.