Forgotten Weapons is a website run by Ian McCollum dedicated to rare and unusual and of course, outright forgotten firearms. Not surprisingly, throughout the history of the gun, there have been many failures, unsuccessful designs and successful designs that were simply eclipsed by better guns that would push others into obscurity.

In just a few short years the website has developed a strong following and is a great place to learn about exotic and sometimes hilariously-bad guns — there’s a reason many of these guns are forgotten — and also how they worked, how they didn’t work and why they dropped off the map.

It would be hard to find anyone who’s familiar with all or even most of the firearms showcased on Forgotten Weapons, except for McCollum, naturally, making it a particularly unique corner of the Internet.

While the website serves to enlighten and entertain, it’s also an archive of rare and interesting guns. These guns won’t be around forever and they’re half-forgotten already. McCollum is doing a real service by noting their place in history before they disappear forever.

Forgotten Weapons doubles as an archive of these sometimes historic, sometimes simply forgettable guns, and for that reason we’d like to get the word out about McCollum’s Indiegogo campaign. 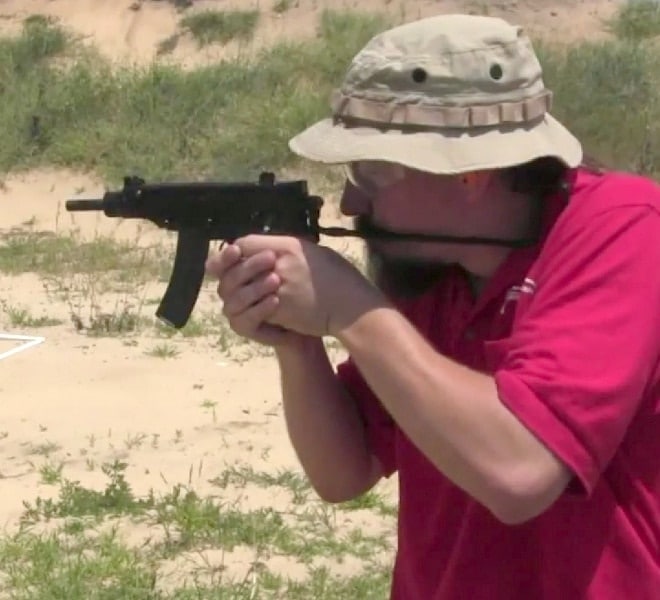 Forgotten Weapons has over the years managed to chronicle many of these guns, often up close and in person. In the process they’ve recorded hours and hours filming these firearms, and while the video is good enough for blogging purposes, the truth is that Forgotten Weapons has grown bigger than that.

It takes professional equipment to put together great videos, the type of video these guns deserve. And to that end McCollum is asking for a little outside help.

McCollum is trying to raise $7,500 for the equipment necessary for high-polish footage, which isn’t all that much. Case in point, the fundraiser has only been running since the June 17 and has already raised more than two-thirds of the intended goal.

In the likely event that the Indiegogo campaign reaches its primary goal Forgotten Weapons will soon pick up a professional-grade Cannon video recorder, a boom mic, a set of wireless mics for interviews, a GoPro camcorder for action shots and — drumroll — a radio-controlled quad-copter cam.

These are gonna be some pretty cool videos.

If the campaign manages to raise an extra $5,500 they will also pick up a dedicated slow-motion video recorder. They’re not looking for something really up there, just good enough to shoot footage of guns cycling in 1080p.

If you’ve come to love Forgotten Weapons as much as we have, head over to the Indiegogo page and chip in. They are accepting donations of $20, $25 or $50 — they have already sold out of the limited-quantity $100 rewards.

Twenty bucks gets you a warm fuzzy feeling. The $25 reward is a personal out-loud thank you in a video that will detail how the equipment will be used and $50 gets you a thank-you and a DVD full of more than 200 digitized machine gun manuals “from the AA-52 to the ZB-30.” The collection normally sells for $30 by itself.

You of course don’t have to contribute to help out. Just spread the word: Forgotten Weapons is up to something good, and they need a boost.