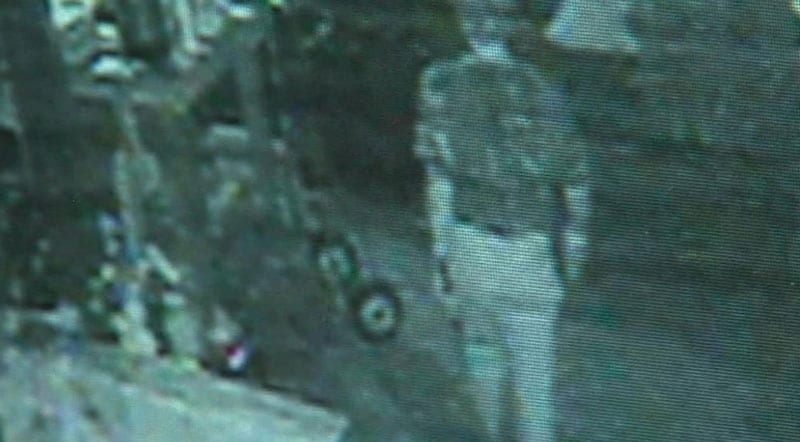 The break-in was caught on the store’s video surveillance and in this still photo the hatchet can be seen in the teen’s left hand, the flashlight in his right. (Photo credit: WDAZ)

A 16-year-old boy is behind bars after he was caught breaking into a Red Lake Falls, Minnesota, consignment shop early Sunday morning.

Store owner Kert Wright and his wife, VeAnn, make their home in the basement of Wright’s Everything Consignment. According to local media, the couple awakened to noises in the shop at about 2:30 a.m. So Kert armed himself with a .22-caliber handgun, which he says he always keeps near his bed, and went to check the store.

What Kert found was a 16-year-old boy in the basement bathroom. Upon seeing that the man was armed, the teen immediately pleaded with him not to shoot and declared to Kert that he was only there using the bathroom.

Kert didn’t buy the boy’s story, but he also didn’t pull the trigger. However, VeAnn then noticed at that point that the teen had something in his hand. Kert demanded he drop the item, which turned out to be a small hatchet.

But even though the man was armed, the teen still took his chances and tried to flee. Kert kept his cool, however, even after he was hit across the head with a flashlight.

“I grabbed him and threw him down here on the floor. I got on top of him and said don’t you move and I said a few other choice words I shouldn’t repeat,” Kert recalled.

VeAnn called 911 and Kert kept his pistol trained on the teen until police arrived.

He was arrested and charged with first-degree burglary and although he is only 16-years-old, he could still be tried as an adult. If convicted, he could face a maximum sentence of 20 years in prison and/or a $35,000 fine.

Kert received only minor injuries during the ordeal, but he is now rethinking the shop’s security system and considering buying a pistol for his wife as well.

“Something has got to happen. This is ridiculous for people to start doing this stuff. I hate to say it, but maybe somebody needs to get shot once in awhile. Maybe they’ll stop breaking into people’s houses, because they break into people’s homes quite a bit here.”

Red Lake County Chief Deputy Brad Johnson says he firmly believes in the Second Amendment and an individual’s right to protect themselves, but he also believes that sometimes it’s better to just be a good witness.

And concerning Kert’s actions against the teen intruder, Johnson said, “He used exceptional restraint in my mind in not using his handgun.”