TSA to gun owners: Review the rules before flying the friendly skies (VIDEO) 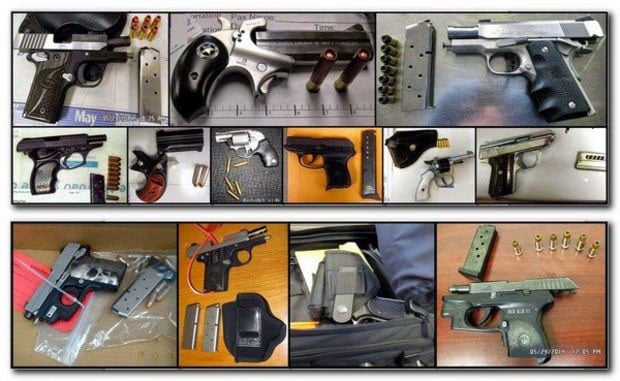 It doesn’t matter how you pack it, your pistol’s not coming on your carry-on, says the TSA. (Photo credit: Transportation Safety Administration)

With summer in full swing and many thinking about vacations and travel, the Transportation Security Administration is urging gun owners to plan ahead and review the rules and regulations for firearms on flights before they arrive at the airport.

In other words: Don’t even think about trying to pack that pistol in your carry-on luggage because it’s not gonna get past security.

In an attempt to help gun owners travel with greater ease, the TSA conducted an informational session this week at the Buffalo Niagara International Airport, one of several such sessions across the country.

With the number firearms confiscated in airports continuing to rise each year – from 976 in 2009 to over 1,800 last year – the TSA hopes to better inform individuals of the proper way to travel with a firearm.

“Here it is, more than a dozen years after 9-11, and we think it would be routine for people who own firearms to know those rules and regulations and laws,” TSA spokeswoman Lisa Farbstein told the Buffalo News on Monday. “Yet what we’re seeing is people saying they forgot they had it.”

According to NFTA Transit Police Chief George W. Gast about six to 12 firearms are found by security at the Buffalo airport each year. The number has been lower this year, with only one discovered so far. But nonetheless, the TSA also revealed one airport had a record-breaking 18 confiscations in a single day earlier this month.

“It’s always the same story: ‘I forgot, I didn’t realize it was in my bag, this is a bag I’ve used to go to the range, and I forgot it was there,’” Gast said. “We’ve never had somebody say, ‘Yeah, I put it in my bag and I’m trying to get on the plane.’ ”

But regardless of the reason for having a firearm tucked away in a suitcase or other bag and whether or not the act was intentional or accidental, Gast says it’s just not worth the risk.

“First of all, you’ve got to know that you’re not coming to the checkpoint with a gun,” Gast said. “That’s going to cause you all kinds of aggravation, all kinds of headaches. In the best-case scenario, you’re going to miss your flight. You’re going to be tied up for hours.”

If it’s discovered that a passenger is in possession of a firearm – whether on their person or in their baggage – that person is detained and the FBI is contacted. The case is then forwarded to the U.S. Attorney’s Office to determine whether or not a prosecution is in order.

However, if the case is declined, it still moves on to state authorities for possible prosecution. Regardless, the person’s firearm is always taken – and not returned – and a citation is issued, which could be up to a costly $11,000. And it makes no difference if the individual has a valid concealed carry permit either, the rules still apply just the same.

And while the TSA does acknowledge an individual’s right to travel with a firearm – yes, even on an airplane – they also say there is a right way and a wrong way.

According to the TSA website, “Travelers may only transport UNLOADED firearms in a locked, hard-sided container as checked baggage. All firearms, ammunition and firearm parts, including firearm frames, receivers, clips and magazines are prohibited in carry-on baggage.”

Replica firearms are also prohibited from carry-on luggage, but scopes may be kept in either carry-on or checked baggage.

But it’s not just guns that the TSA doesn’t want in carry-on bags either. In addition to the guns confiscated each year, they have also discovered knives, stun guns and even grenades. In fact, the TSA has an Instagram account where they display pictures of the many – and sometimes unique – weapons that they find.