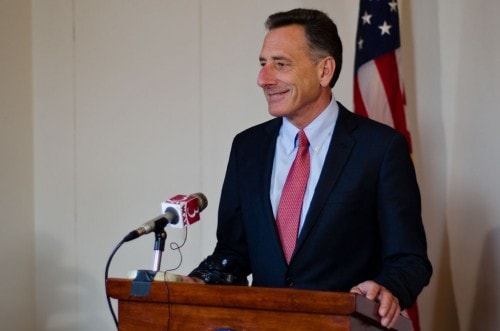 Gov. Peter Shumlin this week signed into law a bill to allow law enforcement to seize and store guns from those who are the subject of a restraining order in Vermont.

This move, after a five-month battle and concessions by both sides of the debate, was hailed as a victory by women’s’ rights groups.

“We’re very excited about it. It takes an important and long overdue step toward addressing the issue of lethal domestic violence in our state,” said Sarah Kenney, Vermont Network Against Domestic and Sexual Violence.

The measure, H.735, drew fire initially after it was introduced inside a 31-page bill designed to adjust certain judicial and executive fees inside the Vermont government. It would authorize law enforcement agencies in the state, and Federal Firearms License holder (FFL) holders working with them, to charge storage fees for firearms surrendered to the police under a restraining order, which led to protests from gun-rights advocates and criticism that the legislation is a “forfeiture bill.”

The original language of the bill was then restructured to allow a third-party private citizen not otherwise prohibited from possessing firearms to store the guns of a person temporarily barred from having weapons due to a protective order. In cases where the court feels that relinquishment to the other person will not adequately protect the safety of the victim, they can still order the guns stored by local law enforcement or a FFL.

If guns are stored by an FFL, the law allows fees of up to $200.00 for the first firearm, and $50.00 for each additional gun for up to 15 months, prorated on the number of months the items are stored; then $50.00 per firearm per year after.

In its final form, H.735 passed the Vermont Senate by a 21-6 vote and the state House by 87-48 with the tacit approval of the Vermont Federation of Sportsman’s Clubs, who originally opposed the bill and pushed for the concessions.

State republicans, a minority in both chambers in Montpelier, have accepted the legislation.

“Now that it’s law, I don’t have any intention and I’m sure none of my caucus members have any intention in changing it. But what we will do is work with more transparency when dealing with these gun issues going forward,” said Rep. Don Turner, R-Minority Leader.

The Vermont law is the latest in a series of measures, not just in purple states but in deep red ones as well, that have addressed gun restrictions due to domestic violence. Many of these bills passed into law after the National Rifle Association opted to remain neutral on the issue, opening the door for negotiations and concessions between pro-gun lawmakers and pro-gun control lawmakers.

Meanwhile, Everytown for Gun Safety released a study Wednesday taking credit for “working to close the loopholes that make it easy for abusers to get guns,” in six states, including Vermont.