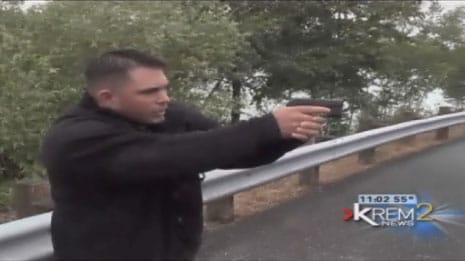 “It did 100 percent save my life,” the father and former marine said. “If I didn’t have my pistol today I’m pretty sure I would have been dead.” (Photo credit: KREM)

Thanks to being armed, a former marine from Coeur d’Alene, Idaho, narrowly escaped a potentially dangerous attack earlier this week while out with his young daughter at a local lake.

Anthony Broyles and his 2-year-old daughter had come to Higgins Point along Lake Coeur d’Alene when they were approached by a man armed with a knife, but when Broyles pulled out his Ruger LCP, the man quickly backed down.

“Me and my daughter were parked here and I was standing by the vehicle on the rail. There was a van that was parked in that direction with two gentlemen sitting in it,” Broyles told reporters following the incident.

As Broyles and his daughter gazed upon the lake with their backs towards the parking lot, the armed man came upon them and demanded money from Broyles. But Broyles didn’t reach into his pocket for cash.

“I pushed my daughter back, pulled out my weapon, cocked it and aimed it at him,” Broyles said.

The man, described as a Hispanic male in his late 30s to early 40s, immediately left, fleeing with the other men in a light blue colored van.

No shots were ever even fired and neither Broyles nor his daughter were harmed.

Although he did not elaborate, Broyles told reporters that he believed the man was attempting to kidnap his daughter. He also believes being armed that day not only protected his daughter, but saved his life as well.

The Kootenai County Sheriff’s Office said Broyles acted appropriately. State law allows residents who feel their life is threatened to defend themselves with equal or greater force than that being used against them.

Ironically, a lawsuit is currently underway in Idaho for residents to be allowed to legally carry firearms on property owned by the U.S. Army Corps of Engineers. And although Lake Coeur d’Alene is not owned by the Corps, the issue frequently arises in lakes and parks across the country.

In fact, just last week a man in Georgia filed a suit against the Corps after being denied a permit to carry his handgun at the Lake Allatoona campgrounds. His reason for wanting to carry a gun on the campgrounds?

“I want it for the same, exact reason I have it at my home,” David James, the plaintiff, said. To protect himself and his family – including his young daughter.