A jury in a federal court trial this week found a Minneapolis man guilty of smuggling guns to Nigeria and lying to gun sellers while buying a gun.

Sheriff Olaleran Mohammed, 51, was convicted on Monday of one count of smuggling goods from the U.S. and 17 counts of providing false statements during the purchase of a firearm.

Last year, Mohammed, a naturalized U.S. citizen now living in Brooklyn Park, was indicted for the crime in October and arrested in November during a trip home from Nigeria. 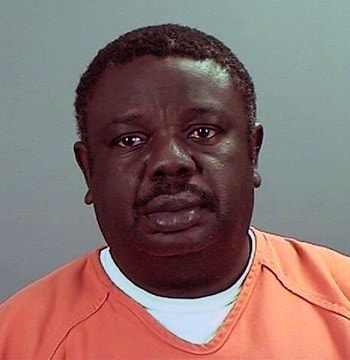 Sheriff Olaleran Mohammed was arrested in Atlanta while on a trip back from Nigeria.

“Gun smuggling overseas is a serious offense our office will pursue aggressively,” said U.S. Attorney Andrew Luger, who argued the case for the government. “I am pleased with the jury’s verdict and with the hard work that led to that verdict.”

The Bureau of Alcohol, Tobacco, Firearms and Explosives started investigating Mohammed in the fall of 2012 when agents learned that he bought seven handguns within days of each other at a gun shop outside the Twin Cities. Between 2009 and 2012, investigators learned that Mohammed bought 17 handguns — something that tipped off the Feds that he likely lied on at least some of the purchase forms.

Additionally, agents with the Department of Homeland Security Investigations raised concerns about the high number of purchases since Mohammed frequently traveled to Nigeria for his international export business.

In December 2012, HSI agents suspected that Muhammed was smuggling the weapons overseas by hiding them inside a vehicle stored in a shipping container traveling through Spain. The agents notified Spanish law enforcement officers who stopped the shipment and inspected it. They found seven 9mm and one .22-caliber handguns.

Mohammed faces unto 10 years in prison for each count. A judge will determine his sentence at a future hearing, yet to be scheduled.