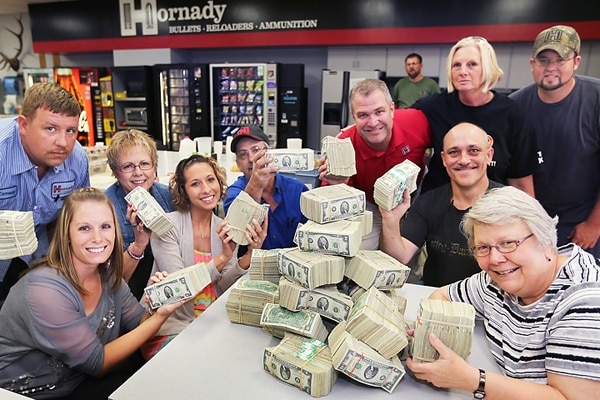 Jason Hornady, vice president of sales and marketing at Hornady Manufacturing, in red, with 30,500 $2 bills and a collection of Hornady employees just before bonuses were issues. (Photo credit: Barrett Stinson/World Herald News Service)

After the local city council alleged the company had little impact on the community, Hornaday handed out $61k worth of $2 bills to its employees this month with instructions to spend them in town.

The payouts to an  estimated 300 employees at Hornady’s 108,000-square foot Grand Island, Nebraska, location came as part of an annual bonus paid for the past three years.

“Two years ago, we caught a lot of flak from the city council and some people in the city of Grand Island for how we don’t support the community and we don’t do things around here, which we disagreed with,” Jason Hornady, vice president at Hornady Manufacturing, told Omaha.com.

In response to that criticism, which Hornady said candidly hurt their feelings, the company issued bonuses paid out in $1 coins.  These ‘brass bucks’ came with the special request that employees spend them around Grand Island, to show the economic impact that the company had in the town of some 48,000.

Last year’s bonuses were switched from coins to $2 bills. The denomination is one of the rarest in circulation, accounting for as little as one percent of U.S. currency, meaning that Hornady has to order its stacks of Jeffersons up to a month in advance, as many banks do not stock the note.

Gun rights advocates have long favored use of the $2 bill as something of a ‘protest currency‘ due to its easy relationship to the Second Amendment of the Constitution. Thomas Jefferson, pictured on the note, was not a framer of the document, however, according to the U.S. National Archives, “it was partly through his insistence that the Bill of Rights, consisting of the first 10 amendments, was adopted.”

Hornady related that the choice of currency was designed, in part, to spark conversation.

Hornady has been located in the area since 1949 when founder Joyce Hornady, using a surplus bullet assembly press in a rented garage on 4th Street in Grand Island, began to produce his own 30 caliber bullets for sale.

The company also made clear that its employees aren’t just getting the $2 bills, saying, “They also receive a nice check and a deposit into their 401(k)s.”