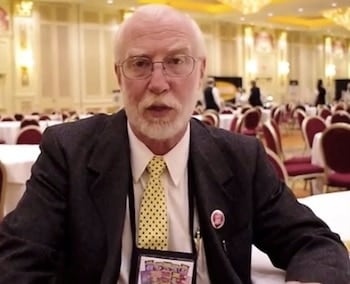 Alan Korwin has authored 14 books, 10 of which are on gun laws. How many books have you written?  (Photo by Guns.com)

In the letter, which you can read below, Korwin tells POTUS to put aside his gun-control agenda, which includes a mandate to require universal background checks on all private firearm transfers, to instead focus on policy solutions that have instant and direct appeal to the estimated 100 million gun owners in this country.

Specifically, Korwin believes that Obama should use his bully pulpit and executive authority to promote “gun-safety training and marksmanship in schools” as a means to dispel myths about firearms and educate the public on how to safely and responsibly handle a gun.

As Korwin writes, “Let us educate them. Let there be light.”  It’s through education, one can surmise from Korwin’s public missive, that lives will be saved.

Here is the open letter:

An open letter to the President of the United States

I agree with your recent remarks — it’s terrifying to have all these shootings. I want it to stop as much as you or anyone. And I share your frustration in seeing nothing get done.

What I don’t understand is why you keep trying to do the same things and get blocked.

You know that those plans will meet with fierce resistance. Instead, try something that the community at large might accept, and finally move us ahead. Work both sides.

Stop harping about background checks, with the now tired litany about how it’s so reasonable, yet you can’t even get that.

Well, OK, you can’t. It’s time to accept that. But you don’t seem to know why. The gun owners out here know why.

The shootings would not have been stopped by background checks.

It’s the wrong answer to the problem.

It would have affected all of us — and so we resist — but it would not have “done something” about the psychotic murderers we want to stop. Let’s not get into what the proposed bills really proposed, that’s for another day.

So if you want to “do something” with huge grass-roots support and get it done, try promoting gun-safety training and marksmanship in schools. Watch what happens then.

Right now schools are a gaping cavern of ignorance on the subject of guns. Kids think guns are the fun blood bath they see in pop culture. Do something about that.

Work with the firearms community — not against it. We’re your constituency too. Teach gun safety and respect for arms — like 100 million decent gun owners have — instead of leaving the festering ignorance in place. The forbidden fruit of guns — a word students can’t even voice — can’t be helping.

Wouldn’t it be nice to have the support of 100 million gun owners, instead of banging heads with us all the time? Teachers, school administrators, their unions, students, most haven’t got a clue about the true role of guns in our lives and culture. Let us educate them. Let there be light.

Prominent doctors have suggested treating guns, which they too understand poorly, as germs and disease. Louis Brandeis framed it well: the best disinfectant is a little light.

Encourage gun-safety and marksmanship training for all Americans, to teach respect for this constitutionally protected property. You’ll garner the significant support you seek, and do something to move a culture that has grown inured, as you have so eloquently noted, to something it should not tolerate. Get something done.

Korwin, who is the owner of Bloomfield Press, the administrator of Gunlaws.com, and the author of 14 books, had a similar message for the public and for gun owners when Guns.com spoke with him at SHOT Show 2014.

Check out the SHOT Show interview: