Marine who dove on grenade awarded Medal of Honor (VIDEO)

Marine Lance Corporal William “Kyle” Carpenter, who fell on a live grenade to shield his fellow Marines from the impending blast, was awarded the Medal of Honor Thursday for his heroic and selfless actions that fateful day in Afghanistan in 2010.

Carpenter, now 24, was seriously wounded from the explosion. He lost most of his jaw and teeth, one of his eyes, suffered a broken and tattered arm and countless lacerations, and was almost given up for dead.

But over the past two and a half years Carpenter and his doctors have been diligently working to rebuild his body and when President Obama presented him with our nation’s highest military award, Carpenter stood tall on his own two feet, CNN reports. 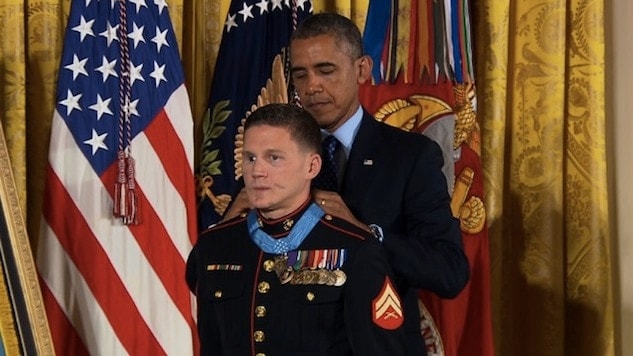 Carpenter nearly died when he took the grenade blast, but after two and a half years of working with doctors to rebuild his body, he was able to stand tall while accepting the Medal of Honor.

While his road to recovery has been long and painful, Carpenter says he’s actually thankful for the time he spent in the hospital.

“I look back, and I’m actually very appreciative I had those two and a half years, because those years put things in perspective more than a whole lifetime of things could if I wasn’t there,” said Carpenter.

Carpenter was on a rooftop in Helmland province with Lance Corporal Nicholas Eufrazio on November 21, 2010, when a firefight broke out. Taliban Insurgents lobbed a grenade onto the roof and Carpenter dove on top of it. The explosion nearly killed him, and seriously injured Eufrazio as well.

In a way, though, the explosion actually did kill Carpenter. He had to be revived while being transported by helicopter and was later declared dead when he arrived at the field hospital. When he was transported to Walter Reed Army Medical Center, he almost died again.

But Carpenter’s Marine Corps spirit is indomitable and since that rooftop battle he’s done more than just survive, he’s thrived.

“The enemy killed me,” Carpenter said in a Defense Department video. “I came back, I ran a marathon, I completed a mud run and jumped from a plane. I won’t ever quit. I am just getting started.”