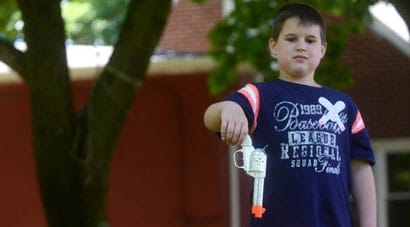 A first-grader in New Kensington, Pennsylvania, was suspended for two days earlier this month for turning a toy gun into his teacher after he realized it had accidentally been left in his backpack.

Seven-year-old Darin Simak had brought a different backpack to school than he normally used. Once at school though he realized he had unintentionally left a toy gun in the backpack.

“He found the toy gun on the outside pocket,” the boy’s father, Chris Simak, told reporters after the incident. “He took it straight to the teacher and said that he wasn’t allowed to have it.”

The teacher informed the principal that the child had brought the toy to school and the child was sent home. Although he originally faced the possibility of expulsion, school officials determined during a disciplinary hearing that Darin should receive two days suspension for bringing the toy to school.

But the boy’s father doesn’t believe the school’s actions were appropriate.

“He did the right thing, and we’re trying to teach him the right way and now they’re teaching him the wrong way,” said Darin’s father.

“Years ago, there used to be a lot of ‘zero tolerance’ policies,” Robinson said. “And I think that those have kind of fallen out of favor. There’s usually more leniency given in policies that we help to develop.”

Although replica weapons normally fall under the same policies as regular weapons because they often look so similar and can therefore lead to other problems in the school, Robinson said that situations such as Darin’s are difficult because school policies often don’t address what to do when the student reports the issue themselves. 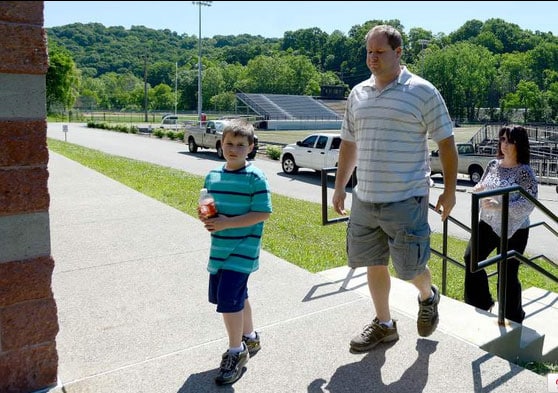 After being suspended for two days, Darin was allowed to return on the last day of school. (Photo credit: Trib Live)

“It doesn’t typically address that situation,” he said. “There are 100 different situations that could happen. It’s hard to put all the scenarios into a policy.”

Regardless, Darin’s father doesn’t think he should have been suspended.

“What was he supposed to do?” he said. “Just hide it and keep it in his bag so he doesn’t get in trouble?”

And when Darin was asked if he would turn the toy into the teacher again, he adamantly said, “Yes!”