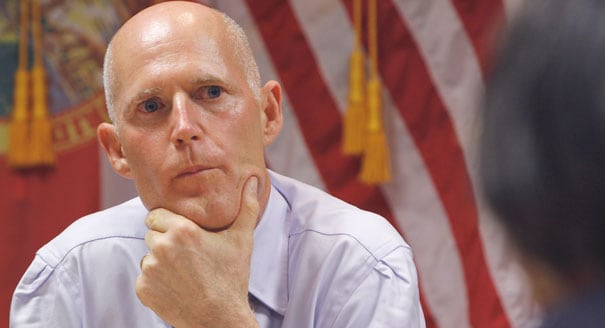 Gov. Rick Scott approved several pro-gun bills Friday that covered everything from clarifying use of force to ending insurance discrimination against gun owners.

“We have a solid, pro-gun governor who strongly supports the Second Amendment and these are all common sense pieces of legislation with a demonstrated need,” Marion Hammer, president of the Unified Sportsmen of Florida and past president of the National Rifle Association, explained to Guns.com in April.

One of the most controversial of the pack was HB89, which changes the interpretation of the threatened use of force. It will make it legal in the state for one to effectively display a weapon in a self-defense situation if proper justifications are met.

The bill was originally crafted after Marissa Alexander, a South Florida mother, was sentenced to a 20-year mandatory sentence in 2012 for firing a handgun during a domestic dispute as a consequence of the state’s “10-20-life” laws.

Commonly called the “Warning Shot” bill in the media, gun-rights advocates in Florida take exception to that classification.

“HB89 is not about warning shots,” said Hammer to Guns.com Friday. “HB89 is about stopping abusive prosecutors from charging people with aggravated assault for defending themselves against an attacker.”

“Self-defense is not a crime,” the NRA icon continued.  “Self-defense is a constitutional right and some Florida prosecutors have been violating those rights. Whether you display a firearm or discharge a firearm to stop an attacker, it is still self-defense. You shouldn’t be forced to shoot an attacker to have the protection of the law. This bill tells prosecutors to stop treating victims like criminals and stop treating criminals like victims.”

Florida Rep. Neil Combee, the sponsor of HB89, said Friday on Twitter that he hopes it will help with Alexander’s case, which her legal team is currently appealing with the new law in mind.

The second new law started as HB255/ SB424 and is designed to stop discriminatory insurance practices against firearms owners. The Florida Office of Insurance Regulation already polices this type of discrimination, but the law adds more avenues to protect consumers.

The important change is that this law will allow individuals to sue companies directly if they feel they are discriminated against, i.e. their policy was canceled or denied due to a firearms collection.

Next, HB 7029 or “the Pop Tart bill” loosens the zero tolerance guidelines for educators and students in terms of simulated gunplay. The new law is a response to an incident last year in which an elementary-school student was suspended for chewing a breakfast pastry into the vague shape of a firearm.

“Anyone that believed that a 5-year-old child should be suspended from school for pointing a finger and going ‘bang bang’ has some serious problems, yet that’s been going on around the country,” Hammer said of HB 7029. “Zero tolerance doesn’t mean traumatizing young children for being children when they play.”

The final two bills approved by Gov. Scott, HB 523, and HB525, are designed to speed up Florida’s concealed-carry permit applications. HB 523 would allow qualified Tax Collector offices to ‘fast track’ the concealed-weapons licensing application process. HB 525 would ensure that the same public records exemptions that exist for the state on permit holder information are extended to the county tax collectors, so that applicant information cannot be shared and will remain private.

Gun-control groups pushed to throw up a roadblock to this pair of bills, asking voters to pressure the governor’s office for veto.

“These bills would put guns in the hands of dangerous people,” because they would expand Florida’s “already flawed CCW-permitting system,” explained Erika Soto Lamb, communications director of Everytown for Gun Safety, to Guns.com in an email.

Florida currently has more concealed-carry permit holders than any other state, with 1,269,021 issued as of May 14, 2014

Of the five pieces of legislation, SB424 will take effect July 1, 2014, while the other four became law immediately upon Scott’s signature Friday.