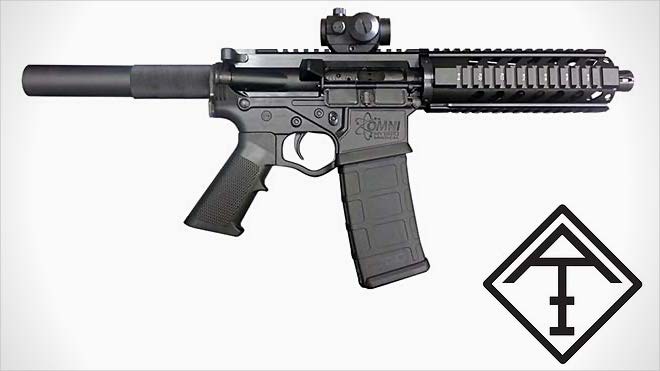 American Tactical is jumping into the AR-15 pistol game with the announcement of its new Omni-Hybrid AR-15 Pistol. This compact little gun will make a fine range toy and will pack away in tight spaces where a full-size AR wouldn’t be welcome.

Like their Omni-Hybrid rifles the Omni-Hybrid pistol is built around a “hybrid” lower receiver. At the core of the receiver is a cast zinc metal insert, which reinforces the buffer tower and rear section of the receiver where it is stressed the most.

The rest of the receiver is an over-built composite fiberglass-reinforced polymer that is both lightweight and flexible, being able to take abuses that would crack a traditional alloy receiver. This addresses an uncommon but oft-mentioned issue that was seen with early polymer lower designs that sometimes resulted in cracked buffer extensions. This receiver is metal where it counts.

The metal insert is visible at the rear of the receiver and provides the backbone of the buffer tower. (Photo credit: ATI)

Rounding out rest of the specifications the Omni-Hybrid Pistol has a 7-inch barrel, a 7-inch buffer tube and a free-floating quad-railed handguard that stops right at the end of the pistol’s birdcage flash hider. We’re sure this thing is still quite capable at throwing fireballs that clap like thunder.

Even with a quad rail, with its polymer construction the complete pistol weighs in at just 4.75 pounds.

And with it’s 7-inch buffer tube it’s the perfect candidate for a SIG SB15 arm brace.

“The patented Omni-Hybrid AR-15 pistol is the newest edition to the Omni-Hybrid line of products,” said Joe Calabro, director of marketing for American Tactical. “We are making an AR Pistol product that is at a price point which will allow all black rifle enthusiasts the opportunity to own a quality product at an affordable price.”

ATI has set the Omni-Hybrid AR-15 Pistol’s MSRP at $599, and of course real-world prices should be a bit lower than that, making it an approachable range toy or pack rifle.

Because this is a pistol it can’t be used with standard vertical forward grips but it can be fit with an angled foregrip no problem.

This is a neat little gun for someone looking to have fun and make a little noise at the range or wants a compact, lightweight AR-15 pistol for hiking or camping without turning to more expensive take-down rifles.

And if you were wary about polymer AR-15 lowers you might want to give these guns a once-over. The metal-reinforced design might just change your mind. For more information about these and other ATI gun head over to the American Tactical website.