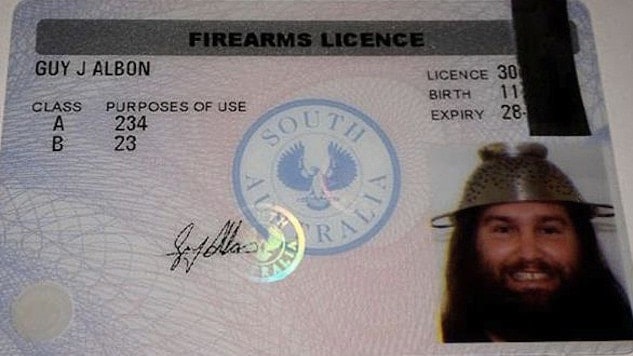 Police thought Guy Albon was mentally unstable because of his picture, so they took away his four guns.

Although the man did as a joke, police didn’t think it was funny, but maybe that’s the joke.

Guy Albon, 30, is a “Pastafarian,” or a practitioner of the satirical religious movement Church of the Flying Spaghetti Monster. So when he went to have his firearms license photo taken he wore a spaghetti colander on his head as part of his religious garb.

When local law enforcement found out they confiscated his guns and ordered him to see a psychiatrist, Australian media reports.

“The law stipulates you can have something on your head… but you have to have your entire face uncovered and if the headgear is being worn it has to have some religious significance,” Albon said. “I thought, ‘I’ve got this one in the bag’… it was an absolute scream.”

While Albon said he was in compliance with local laws, two uniformed officers appeared at his home and seized two rifles and two handguns, saying they’d return the firearms once a psychiatrist deemed he was safe to have weapons.

Albon later passed his psychological evaluation, but police said he had to retake the photo without the colander.

Albon said his involvement in the Pastafarian movement is mostly for kicks, but is also meant to demonstrate Australia’s religious freedoms.

In the coming months, Albon has renew his driver’s license, and he said he’ll be wearing his colander for that photo too.

“What are they gonna do, come and take my car off me?” Albon said.