Would-be robber flaunts gun to victim, then gets shot with victim's gun (VIDEO) 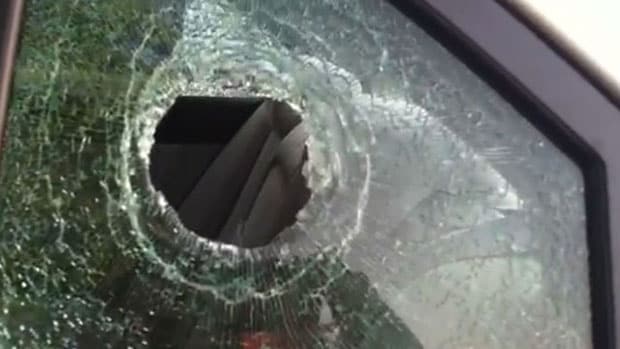 A would-be robber thought he had found an easy target in the parking lot of a hotel Friday morning in Jackson, Mississippi, but quickly discovered he was wrong when the would-be victim pulled out a gun of his own.

Alton Lindsey was in the parking lot of the Motel 6 at about 6:30 a.m. when a man approached him and asked if he had a cigarette, local media reports. Lindsey told the man that he didn’t and the man began to walk away.

However, the man then turned around, came back towards Lindsey and pulled a gun on him, apparently demanding cash this time. He taunted Lindsey, saying something to the effect of, “I bet you don’t have one of these,” referring to his firearm.

But little did the man know that Lindsey did, in fact, have “one of these.” Lindsey pulled out a pistol and fired several shots at the would-be robbery, striking him an unknown number of times. The gunfire grabbed the attention of others in the area, as the suspect fled the scene.

“We heard a gunshot and we stepped outside and that’s when I saw the guy backpedaling and we yelled, ‘Hey,’ and he turned and fired at us,” said Christopher Atwood, Lindsey’s coworker, who was also staying at the motel.

According to Atwood, Lindsey shot the man in the chest.

Lindsey then called the police to report what had happened. They caught the man, whose name has not been released, at a nearby apartment complex. He was transported via ambulance to a local hospital and treated for what was believed to be non-life threatening gunshot wounds.

Lindsey, who is a contractor from the coast but currently working on a job in Jackson, was not reported to be injured during the incident. Although he was initially taken into police custody, he has since been released and will likely not face any charges. At this time, Lindsey appears to be protected under Mississippi’s self-defense and Castle Doctrine laws, but ultimately a decision will be made by the Hinds County Jury.