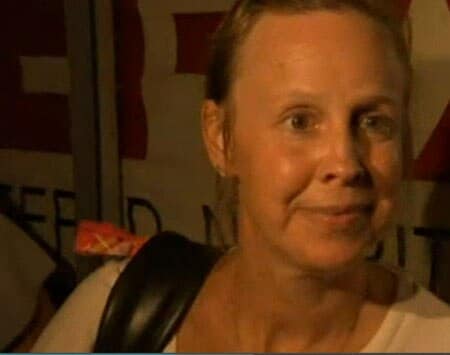 Sharon Doyle was described as a “steel magnolia” by one of her customers, most of which were unaware of her past law enforcement experience. (Photo credit: NBC)

A would-be robber thought he was choosing an easy target when he walked into a health food store in Philadelphia Monday evening and demanded cash from the female owner. A mistake that would cost him his life when the woman turned the tables – and her revolver – on the man, fatally shooting him.

According to a local NBC affiliate, it was just after 5:00 p.m. and the owner of Stan’s Health Food, 46-year-old Sharon Doyle, was in the store alone when the armed suspect entered the store and demanded money. He quickly made his way to the counter, then threw the cash register to the floor to open it.

Once he had emptied the money from the register, the suspect turned his attentions on Doyle, putting the knife to her chest. But little did the suspect know that the petite blonde was prepared to be anything but a victim. The former Philadelphia cop who once worked for the Secret Service pulled out her revolver and shot the suspect once in the torso.

When authorities arrived, the suspect was still clutching a $100 bill in his left hand. He was transported to a local hospital where he was pronounced dead just over an hour after he had entered the store.

Apparently the 47-year-old suspect, who’s name has not been made public, had just recently been released from prison and was well-known to local law enforcement with a long rap sheet and extensive criminal history.

Police confirmed that the shooting was justified and Doyle would not face any charges.

Doyle’s family, grateful that she came away unharmed, surrounded her as she closed up shop following the incident.

“She called real quick, she said she’s fine,” Doyle’s sister, Christine Cutter, told reporters. “She was very calm. We were the ones that were freaking out.”

Doyle simply said, “I just did what I had to do to be here.”