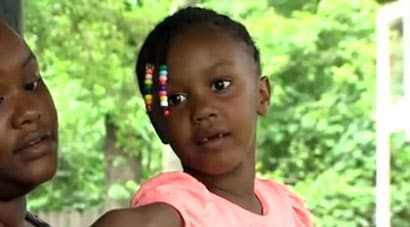 Aviana Parker was injured when a gun accidentally went off.

An Indianapolis mother of a 6-year-old who accidentally shot herself last month hosted a special event at a local park this weekend to help raise awareness of the importance of gun safety, especially where children are concerned.

When the accident occurred, Ebony Parker had left her daughter, Aviana Parker, at a relative’s house while she was at work. Aviana apparently found a loaded handgun in the closet of a back room. The girl’s mother told reporters that Aviana thought the gun was just a toy and started playing with it. But then she dropped it and the gun went off, striking her in the arm.

Parker rushed to the hospital as soon as she received the news of what had happened.

“I was traumatized,” she said. “It’s scary for a mother, especially not knowing the situation or what’s happening with your child.”

Aviana Parker’s arm was injured during the accident and now needs several surgeries.

Aviana has spent the past month in and out of Riley Hospital for Children and has had numerous surgeries as doctors have worked to repair the damage done to her arm. She still faces at least one more reconstructive surgery.

Meanwhile, the medical bills just keep piling up for Parker, the latest being a nearly $10,000 from the hospital, as well as an ambulance bill for $5,000. Parker does not have medical insurance and has repeatedly been denied Medicaid, another reason for Sunday’s event – to raise money for Aviana’s medical bills.

“People having guns in their home and not putting them up, and not having them locked in a safe place … kids can play with them just thinking they’re a simple toy,” Parker said at the event. “They could be in the same situation as I am with my daughter.”

But not all kids are as fortunate as Aviana, for some the accidents are fatal. Parker, who says she never dreamed her child would play with a gun, hopes that some good can come out from the event.