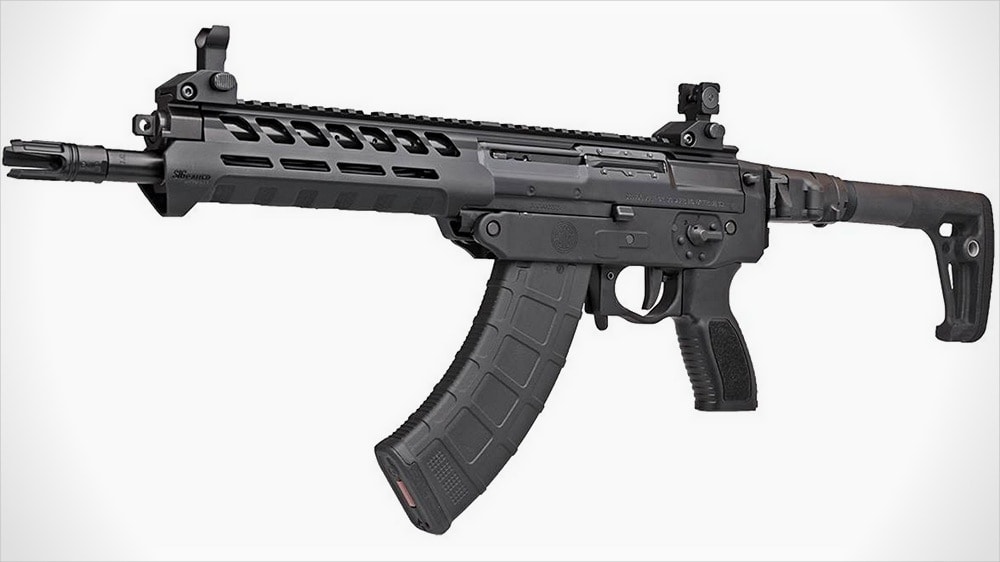 SIG Sauer is gearing up to expand on its new series of 556xi rifles with a model chambered for 7.62x39mm, the 556xi Russian. The rifle is based on the modular 556xi pattern but is chambered for the Russian cartridge and uses AK-pattern magazines.

It is an upgraded version of the established SIG 556 rifle, which is a commercial variant of the SIG 550 family of fighting rifles.

The original SIG 556 is not a modular rifle. The xi models feature redesigned receivers that allow users to swap out their standard 16-inch barrel for barrels of different lengths and calibers. For now SIG is only offering complete rifles but down the road barrel assemblies for caliber conversions will hit the market.

For the most part, the appeal of the 556xi Russian is getting to use AK ammo and AK mags with a rifle that’s absolutely not AK.

The 556xi Russian may be rooted in the 550 design, but it is fully-modernized with an updated handguard to go along with the modular receiver. The polymer or aluminum handguard is made to work with Magpul accessories.

The handguard and upper receiver sport full-length rails for use with optics and other accessories including sights for AR-type rifles. The stock has been upgraded with a cheek riser to make it work with AR-height optics.

Because the design doesn’t use a buffer system the 556xi Russian is able to use a side-folding stock. The stock’s cheek riser is removable for use with low-profile sights and optics.

Even with the new modular barrel system the rifle remains lightweight at just seven pounds, one ounce. The rifle has a 1-in-9.5-inch twist for use with surplus Russian ammo.

The 556xi Russian comes with a set of flip-up backup iron sights and a polymer Magpul AK PMag and is compatible with Swiss-style stocks.

It has ambidextrous controls including the safety selector and reversible charging handle.

When the 556xi Russian hits the market it will have an MSRP of $1,599. Off-the-shelf prices will likely be a little lower than that, but like a lot of other fairly unique products, we expect the 556xi Russian to stick close to the suggested price for a while until the newness wears off.

Fortunately you don’t have to buy a 556xi Russian in order to lay hands on one. SIG is giving one away in their most recent sweepstake giveaway.

Anyone interested in tossing their name in the hat may do so by entering its sweepstakes. For a full list of details and specifications head over to the 556xi product page.