Accidental shootings involving children over the past year. (Credit: Everytown for Gun Safety)

In a report on unintentional child shooting deaths released Wednesday, Everytown for Gun Safety and Moms Demand Action for Gun Sense in America explore fatal shooting accidents which occurred over the past year involving children and, more importantly, how these accidents can be prevented.

Among the findings in the report titled “Innocents Lost,” on average more than 60 children under the age of 14 are unintentionally shot and killed in the United States each year. And, according to the study, “American children are sixteen times more likely to be killed in unintentional shootings than their peers in other high-income countries.”

However, in the year following the Newtown tragedy, that number rose to over 100 children. In addition, Everytown and Moms claim that unintentional shooting deaths are widely under-reported and that in actuality this number only reflects “just a fraction of the total number of children injured or killed with guns in the U.S. each year.”

The data also shows that about 65 percent of the shooting deaths occurred in the home or vehicle of a family member of the victim and that the majority of the firearms involved, although legally owned, were not properly secured. As a result, many of these accidents could have been avoided had the guns been stored in a manner which prevented the children from accessing them.

The 100 fatal shootings from the past year took place in 35 different states across the country and the geographical areas where they occurred varied tremendously – from major cities and suburbs to rural communities. 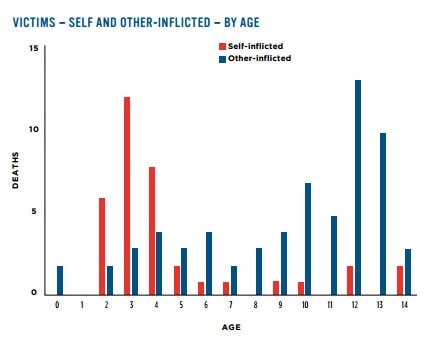 Ages of victims and who fired the shots. (Credit: Everytown for Gun Safety)

Over half of the shootings involved handguns. Nearly 60 percent of the time someone other than the victim fires the gun, while 36 percent of the gunshots are self-inflicted. The study found that younger children, two- to four-years-old, are more likely to die from accidental self-inflicted gunshot wounds, whereas older children, 10 to 13-years-old, are more likely to unintentionally shoot someone else.

Forty-one percent of the guns involved were owned by the victim’s parents, another 35 percent were owned by other family members.

But regardless of the various numbers and statistics, many of these tragedies could have been prevented, and that is the main focus of the report.

Everytown for Gun Safety and Moms Demand Action feel there are several ways to reduce – or even prevent altogether – the number of tragic accidental shootings involving children. Among their recommendations are educating parents, discouraging irresponsible storage and encouraging innovative safety technologies.

According to the report, “Studies show that parents who are counseled by their pediatricians are more likely to adopt responsible gun storage practices. A study of 127 family practice patients who reported gun ownership found that those who were counseled by a doctor about safe ﬁrearm storage were 2.2 times as likely to improve their practices as those who were not.” 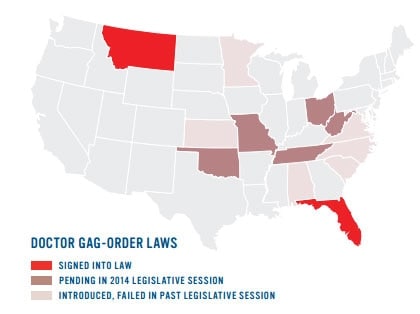 However, the idea of doctors becoming involved in firearm ownership and education about gun safety with their patients is not one that has been met with enthusiasm from most gun owners. In fact, 11 out of 13 states which tried to pass legislation allowing doctors to discuss such topics with their patients have been unsuccessful. Everytown and Moms blame “prompting from the NRA” for such laws failing to pass.

Florida and Montana currently have doctor gag-order laws in place which prevent doctors from legally discussing gun ownership with their patients. Five other states have such legislation currently pending, while another six states attempted – and failed – to pass such legislation.

The report also stresses the importance of discouraging irresponsible storage of firearms and believes that a step in making this happen is to encourage “Child Access Prevention” or “CAP” laws and criminal liability for gun owners who leave firearms where little hands can gain access to them.

According to the report, “A study of hospital discharge data in 21 states with CAP laws found they were associated with a 32 percent decline in nonfatal gun injuries among children 18 and under, and a 64 percent reduction in self-inﬂicted gun injuries. The authors estimated that CAP laws prevented 829 injuries in 2001.”

However, states vary greatly on these types of laws. Currently, three states and the District of Columbia allow charges to be filed if a gun owner stores firearms in a manner in which a minor “may” or “is likely to” gain access to the firearm. Charges may be filed in those states whether a child actually gains access to the gun or not. Eleven states have laws which can produce charges when the child actually accesses a gun and another 14 states have criminal statutes for those who intentionally, knowingly or recklessly give a gun to a minor. The remaining 22 states currently do not have any CAP laws on the books.

The report also indicates that many accidental shootings occur when the person holding the gun mistakenly believes the gun is unloaded and often because the magazine has been removed but a single bullet remains in the chamber. In addition, many accidents also happen when someone is handling a gun which is unfamiliar to them.

Everytown and Moms believe that there are some technologies which would aid in preventing accidents under theses circumstances.

A “chamber load indicator,” as the name suggests, is a means to safely show the person holding the gun that a bullet remains in the chamber. A “magazine disconnect mechanism” removes the ability for a gun to be fired when the magazine is removed. Both features would aid in preventing accidents and some manufacturers have already incorporated them.

“Smart guns” are another technology aimed at reducing accidents by creating a type of personalized gun using biometric technology to ensure that the gun can only be fired by its owner. However, smart gun technology has met much resistance from both manufactures and gun owners alike.

Regardless of which side of the gun debate one is on, it’s likely that most everyone could agree that preventing unintentional shootings, especially where children are involved, is important. While some of the above suggestions could be considered reasonable and others would no doubt receive opposition, one thing remains true: Owning a gun is a great responsibility and safety should always remain of utmost importance.