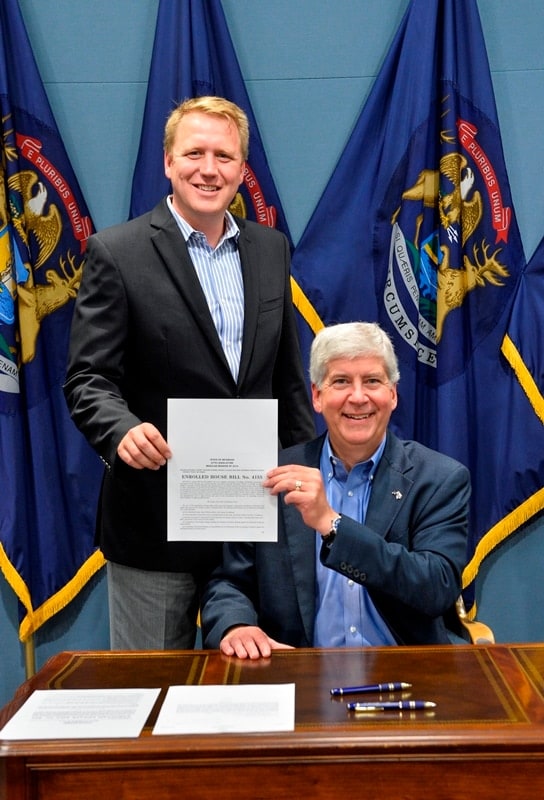 Michigan Gov. Rick Snyder signed a bill Tuesday that will exempt firearms records in the state from being released under the Freedom of Information Act.

The new law would restrict access to the central database containing concealed-pistol license holder’s information to law enforcement only, protecting it from public disclosure. The bill had passed the state senate in a bipartisan 29-8 vote on June 4 before being confirmed in the house by a wide 81-28 margin just six days later.

“We have seen in other states where publication of private information about gun ownership has put those gun owners and their neighbors at risk,” explained Michigan state Rep. Aric Nesbitt (R-Lawton), sponsor of the bill, in a statement made following the governor’s signature.

“The private records of law-abiding citizens who are practicing their Second Amendment rights will now be protected from public exposure,” Nesbitt said.

Nesbitt’s bill, HB 4155 , will limit access of the Michigan State Police database of concealed carry applicants to those with a clear law enforcement-related need, not to include FOIA requests. The legislation requires that the information of those requesting records be recorded and maintained, with the requester affirming the search is being conducted for a lawful reason.

Further, the measure mandates that MSP compile an annual report to track the number of times the database was accessed, categorized by purpose.

After careful analysis, both the house and senate declared that the bill would have no fiscal impact on either state or local government.

The new law codifies an existing 1999 state supreme court ruling in the case of Mager v Michigan in which the court held that the disclosure of gun records to the public would be a “clearly unwarranted invasion of an individual’s privacy.”

Some First Amendment activists in the state have objected to the legislation, claiming the refusal to make information publicly available chips away at the spirit of a free press.

“The FOIA is about keeping a watchdog eye on government,” said Jane Briggs-Bunting, president of the Michigan Coalition for Open Government. “Well, what happens if the government starts fooling around with gun registrations? No one would know about it because there’s no public information available.”

This is the latest victory for gun rights in a campaign to prevent media outlets from publishing the names of concealed carry holders.

According to the Reporters Committee for Freedom of the Press, some 27 states currently offer no public access to their gun permit records, with most others only offering limited access.