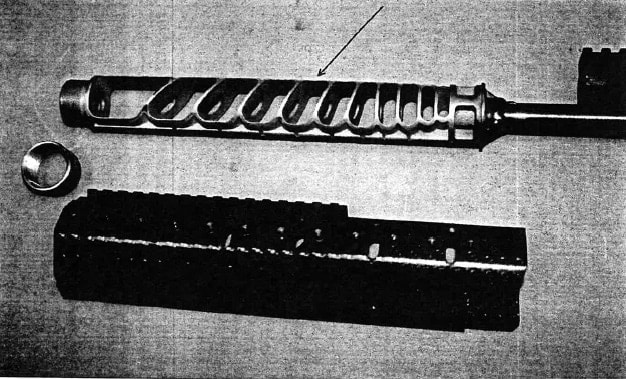 The ATF argues that since the muzzle device is the internal component to a silencer, that it is a silencer. (Photo credit: ATF)

Sig Sauer and the Bureau of Alcohol, Tobacco, Firearms and Explosives will take a break arguing over whether or not Sig’s muzzle device on the MPX is a muzzle brake or a silencer. The two parties filed a joint motion to “stay” until the ATF re-evaluates the device and offers another ruling.

In an order signed by U.S. District Judge Paul Barbadoro, the civil suit will reconvene on Sept. 17 and he has provided a detailed timeline for them to follow from now until then.

Sig was given 14 days, or until June 25, to re-submit a sample of the muzzle device to the ATF’s Firearms Technology Branch along with any information needed to support the company’s claim that it is a muzzle brake, a device designed to soften the felt recoil of a firearm.

The ATF has until Aug. 5 to issue a revised ruling and then Sig will face three options, depending on the ATF’s conclusion.

First, if the agency ends up agreeing with Sig, the company will return to business as usual and eventually start selling the MPX. If not, Sig will have 14 days to provide a written response to appeal the ruling. And if the company decides not to appeal, both parties have to agree to dismiss the case within 30 days.

Sig filed suit in April after contesting the ATF’s original ruling and the agency refused to reconsider.

The device in question is a 9.5-inch muzzle brake welded onto the end of a 6.5-inch barrel and is capable of suppressing the sound of a gunshot if a tubular piece of steel is secured over it. Sig argues that the finished product (without the cover) does not it function as a silencer, nor was it marketed as a silencer, so it should not be classified as one.

However, when Sig introduced the MPX with the muzzle device at the Shooting Hunting Outdoor Trade Show in 2013, Sig representatives explained that the device could easily be transformed into a silencer, and in turn the owner of the device would be responsible for fulfilling his or her legal obligations of owning one.

Silencers, or suppressors (the terms are used interchangeably), are categorized as National Firearms Act items along with machine guns, so they’re heavily regulated. Buyers must follow numerous steps to obtain one, including registering the device with the ATF and paying a $200 tax. Needless to say, it would be a major hurdle for Sig to sell the MPX or the muzzle device to ordinary gun buyers if it is classified as an NFA item.