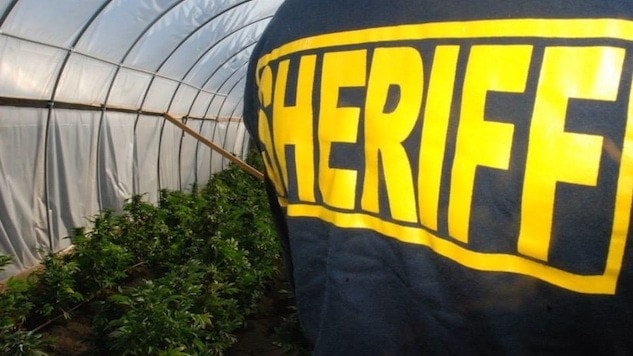 Michael Steven Thyberg was arrested and had his marijuana plants seized after he shot at a pair of hikers that jumped the fence to his property.

California deputies discovered a marijuana grow in the rural Valley Center after a man shot at a pair of hikers near his property Sunday morning.

Michael Steven Thyberg, 45, had a house full of drugs and guns. When a pair of hikers jumped the fence to his property around 8 a.m., he opened fire on them before getting in his vehicle and pursuing them, the Fox-affiliate reports.

Thyberg later turned around and headed back to his residence, which contained 289 marijuana plants, 40 pounds of processed marijuana, a hash oil extraction lab, five grams of hash wax, a shotgun and ammunition.

Deputies responded to the scene in a helicopter and used a public address system to call Thyberg out of his house.

When he was arrested he told police he was simply firing warning shots to scare the hikers away from his property.