Naked intruder poops on kitchen floor, is held at gunpoint by homeowner (VIDEO) 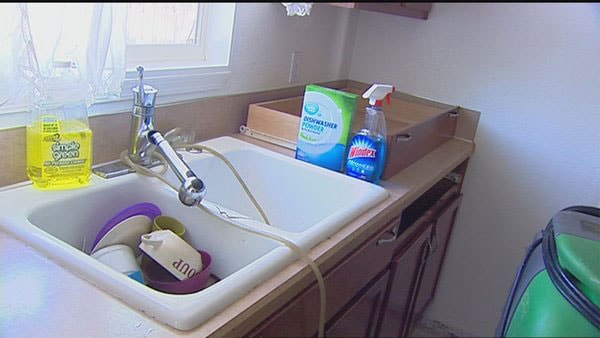 According to the homeowner, the intruder pulled out a drawer and filled it with water before flooding the entire kitchen. (Photo credit: KTVB)

A couple who just recently moved into a new home in Kuna, Idaho received quite a housewarming surprise when they awakened to find a naked man in their bedroom earlier this month, prompting the homeowner to grab his gun and tell the unwanted intruder to leave.

“We woke up 6:30 Sunday morning to a naked guy walking into our bedroom,” Tricia Gillaspy told reporters. “My husband’s like, ‘What the heck is going on?’ And, I’m screaming in utter panic.”

“My husband grabs the gun because we have no idea who this guy is. He’s like, ‘Get out of my house, now!’ But the guy wouldn’t leave,” Tricia said. “So, he puts the gun to his head, and says, ‘I said, get out!’”

Her husband called 911 and attempted to express the urgency of the situation.

And once the couple came out of their bedroom they noticed the mayhem that Coomes created in the rest of the house. Apparently Coomes had flooded the kitchen floor with hot water using the sprayer on the kitchen sink.

But that wasn’t it.

“He craps on my floor, and he must have been playing in it because he streaked it down the side of my walls,” Tricia said. “The stain is gone finally, thank goodness.”

Coomes eventually headed towards the door – at gunpoint – but still didn’t leave the property. He was still outside the home when officers arrived.

And as upsetting as having an uninvited naked man in their bedroom and their brand new house utterly trashed, complete with human feces, the worst was yet to come according to Tricia.

She explained that when the officer arrived, although he cited him with two misdemeanors, they didn’t even arrest Coomes. They simply took him home.

A sergeant from the Kuna Police department later called the couple and agreed that Coomes should have been arrested. He also said that there would be an internal investigation surrounding the incident and the mistakes made during the response would be tied into future training sessions to ensure that type of thing did not happen again.

However, authorities also said that the Ada County prosecutor could still charge Coomes with a felony count of malicious injury to property because the damage was over $1,000.

Coomes, who had apparently been drinking that night, doesn’t remember breaking into the house, taking off his clothes, flooding the kitchen or crapping on the floor.

Regardless, Tricia says, “It’s just frustrating that I’ve had to fight to stay safe in my own home.”