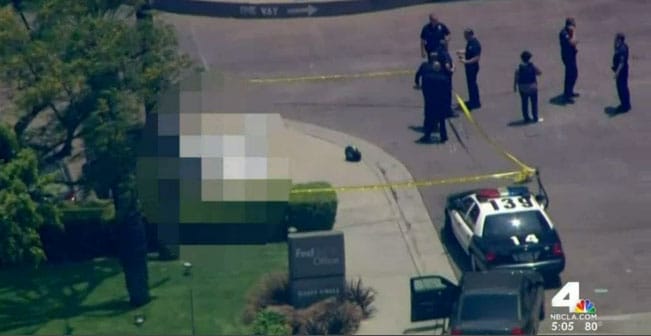 Witnesses and others from local businesses, who say that kind of activity is rare in the area, were shocked by the shooting. (Photo credit: NBC)

One suspect is dead as police search for a second suspect following an exchange of gunfire during an attempted robbery of a California medical marijuana dispensary Wednesday afternoon.

At about 12:15 p.m., two armed men walked into Nature’s Cure dispensary in the Westchester area of Los Angeles and began shooting, but an armed security guard shot back, striking one of the suspects in the abdomen. After a brief exchange of gunfire, the two suspects fled in opposite directions.

“I heard gunshots, but I’m not sure who was shooting at whom,” Felix Avilar, who witnessed the incident from across the street, told reporters from a local NBC affiliate. “I saw one guy run towards the Westin, the other guy ran that way toward La Cienega, but he then came back. He jumped in the car and left in his car.”

Lek Anan, a cook at the Star Noodle Express located next door to Nature’s Cure, said, “We heard the gun pop and we ducked under the table.”

The injured suspect, a man in his 30s whose name has not been released, ran to the nearby Westin Hotel before collapsing in the parking lot. He was pronounced dead at the scene.

The second suspect fled in a dark-colored, possibly black, 7-series BMW. He was described as a black male in his 30s, wearing green pants, a beige shirt and a brown baseball cap, according to the Los Angeles Register.

Following the robbery attempt and exchange of gunfire, Century Boulevard, a main thoroughfare for traffic near the LA airport, was closed for about two hours while authorities concluded their investigation.

Police are still searching for the second suspect and, with the many hotels and other businesses in the area, are hoping that the man was caught on surveillance video.

The security guard, although shaken, was uninjured. One woman who was inside the dispensary during the attempted robbery was injured when she fell and hit her head.

Police did not disclose whether the suspects made it out with any money or marijuana, but did say that armed security at the dispensaries is a common practice because the majority are cash-only clinics.