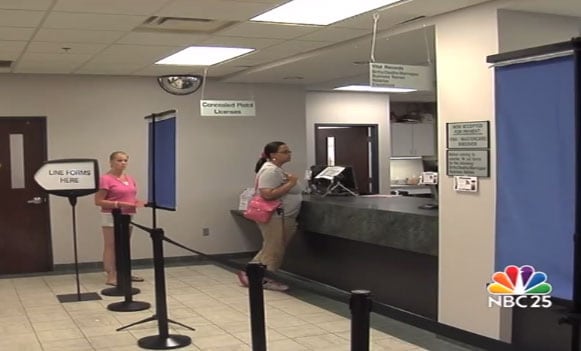 If the proposed legislation passes, gun boards will be eliminated and concealed carry applications will be obtained from the county clerk’s office. (Photo credit: NBC)

Pending legislation in Michigan would make it easier, faster and cheaper to obtain a concealed carry permit and according to an informal poll conducted by a local NBC affiliate, the majority are in favor of the proposed changes.

In fact, more than 80 percent of participants said they were for making the process easier, while 15 percent were against the idea and another three percent were undecided.

Currently, in order to obtain a concealed carry permit, residents must undergo training, pay a fee of $105 and submit their application to one of the state’s 83 gun boards, a process which some say can be a lengthy one.

If the proposed bill becomes law, the gun boards would be eliminated, and the fee would be reduced to $90.  The application will be obtained from the county clerk’s office and background checks conducted by the state police.

But not all agree that the proposed legislation is such a great idea.

State Sen. Mike Green said, “What the local sheriffs and prosecutors want to do is give people the eyeball test which means they want to look at them and say, you look a little goofy, what do you need one for?”

Gun range owner Chuck Melki is afraid that the changes – namely eliminating the gun boards — would end with guns landing in the wrong hands.

“There has to be safeguards, not government control, safeguards to ensure everybody’s safety,” Melki said.

Michigan State Police are also against the proposed legislation, while the Michigan Sheriff’s Association said they’re undecided on the issue.

Still others say that the changes will equate to a more efficient system for obtaining a concealed carry permit.

The bill has already passed the Senate and now must make it through the House before it is signed into law.

Correction: Applicants do not have to undergo an in-person interview as originally reported. Thanks to Gun.com reader Douglas Adams for submitting the correction.