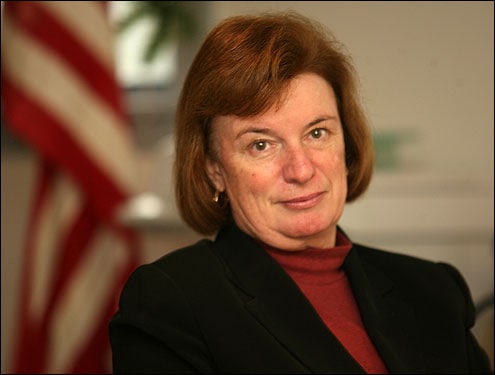 Rep. Carol Shea-Porter (D-NH) is one of the organizers of an open letter by House Dems calling for a vote on gun control measures. (Photo credit: AP)

On Thursday, 163 Dems in the U.S. House of Representatives sent a letter to the House Speaker John Boehner demanding, “a vote on substantive legislation to address gun violence.”

The open letter called recent “moments of silence on the floor of the House” over mass killings in Santa Barbara and others the “last thing” victims and their families need.

“They deserve a vote,” the letter to Boehner (R-OH) continued. “Congressional silence is not a sign of respect, but rather an institutional indictment. We must right this wrong. You must allow a vote on substantive legislation to address gun violence.”

While the letter itself does not mention specific bills, its does attribute “at least 74 school shootings” since Sandy Hook to loopholes in background checks, straw purchases and gaps in the mental health system.

Nevertheless, one of the principal organizers of this push, Rep. Carol Shea-Porter (D-NH), issued a statement coinciding with the letter calling for support on H.R. 1565. This bill, co-sponsored by Shea-Porter, has been languishing in the chamber for 14 months. Termed the “Public Safety and Second Amendment Rights Protection Act,” it aims to strengthen and expand background checks.

“Right now, a criminal in many states can buy a firearm at a gun show, over the Internet, or through a newspaper ad because those sales don’t require a background check,” reads Shea-Porter’s statement. “H.R. 1565 requires comprehensive and enforceable background checks on all commercial gun sales, including those at gun shows, over the Internet, or through classified ads, while providing reasonable exceptions for family and friends.”

The timing of the letter would indicate a move to generate more momentum on Capitol Hill among Democrats, many facing mid-term elections in a few months, to reignite the dormant debate on gun control. Earlier this month Senate Majority Leader Harry Reid challenged lawmakers to expand mandates on background checks for guns, following the shooting of two police officers and a concealed carry permit holder in Las Vegas.

Prior to that call for action, a host of California Dems lead by Sens. Barbara Boxer and Dianne Feinstein introduced a new bill that would provide for “gun violence prevention orders.” This legislation came on the heels of a rampage in Isla Vista, California, in which six were killed and more than 10 injured.