Texas musician Barry Kooda, 61, is foregoing his right to bear arms, and is instead holding an Open Carry Guitar Rally on the Fourth of July.

Kooda’s event will be held at Continental Bridge Park in Dallas from 6 p.m to 8 p.m., and instead of open carrying rifles, the musician has called for attendees to sling a guitar instead, CBS-DFW reports.

Kooda said his Open Carry Guitar Rally is his way of pairing music with a message, and that this is his response to the open carry gun protestors.

“I’m not anti-gun at all. I’m a fifth generation Texas veteran,” Kooda said. “I have guns … leave them at home. You have rights, you just don’t have to express them all the time in people’s faces.” 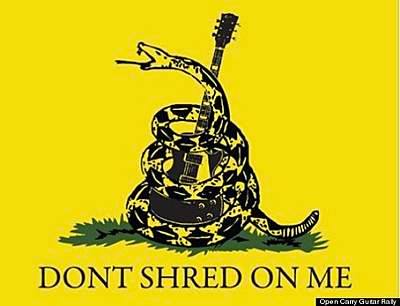 Some of Kooda’s supporters have created their own slogans and T-shirts to wear to the Open Carry Guitar Rally.

The idea originally started as a joke, but quickly gained traction as supporters quickly began sending in their RSVPs.

“It’s hilarious to me,” Kooda told The Dallas Morning News. “Of course I am bathing in it. At the same time it’s flabbergasting. Every time it takes another leap there’s like this internal hysterical laughter. But it is a statement when I set it up I was gonna have lots of people show up and ogle each other’s guitars. The people carry the guns, they either want attention or are ready for the zombie apocalypse. But [Majestic Theater manager] Mike Schwedler and I were talking about it the other day. When they get together, I bet it’s like, ‘That a new AK, man? A 30-round clip? Sweet.’”

But Kooda said he’s not the only one who feels that way. At least 800 people have already signed up to attend the event, and some have even made their own T-shirts to show their support.

“This is my sense of humor. I have a larger following than I’d like because I’m just the local yokel,” Kooda said. “It’s a buzz topic at the moment, and a lot of people feel the same way.”