100 Years Ago: The shots that started a World War and ended three empires 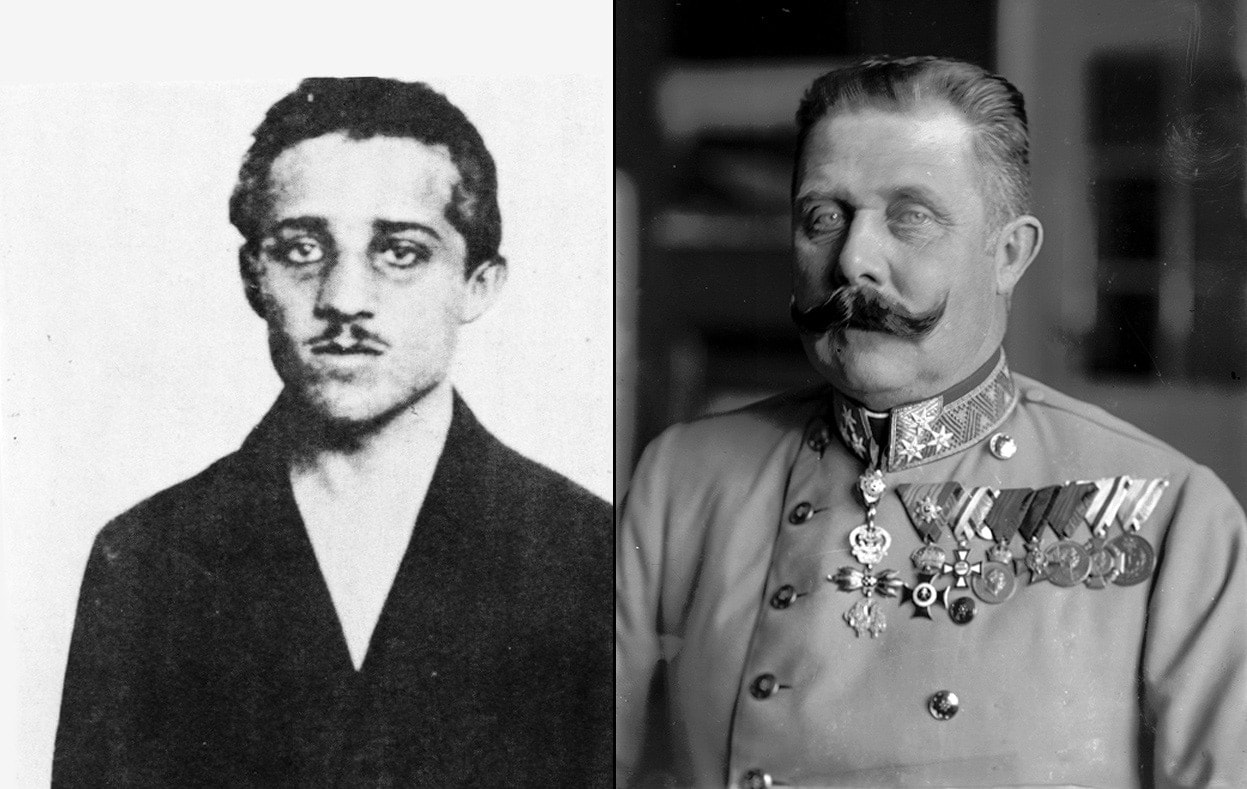 Marking the centennial of the spark that ignited World War I, Bosnia Serbs erected a statue to Gavrilo Princip, the assassin whose shots were the opening volley of the Great War.

The anniversary is that of the assassination of Austrian Archduke Franz Ferdinand on June 28, 1914, in Sarajevo, then part of the Austro-Hungarian Empire.

“Gavrilo Princip was a freedom fighter and the Austro Hungarian Empire was an occupier here,” said Bosnian Serb president Milorad Dodik Friday after unveiling a 7-foot high bronze statue in East Sarajevo commemorating the 19-year old gunman, seen by many in the region as a hero.

Dodik also plans to name a park after Princip while the long-dead assassin’s childhood home is being rebuilt for the fourth time.

Princip was a member of a Bosnian Serb nationalist group that sought independence from the Austrians, which had occupied the region in 1878.

As part of a group of six conspirators who lined the route of visiting Archduke Franz Ferdinand, heir to the throne, Princip fired two shots into Ferdinand’s car as it stalled while making a turn. These shots killed not only the heir, but also his pregnant wife.

Ironically, Ferdinand was a champion for expanded autonomy for the Empire’s Slavic subjects. 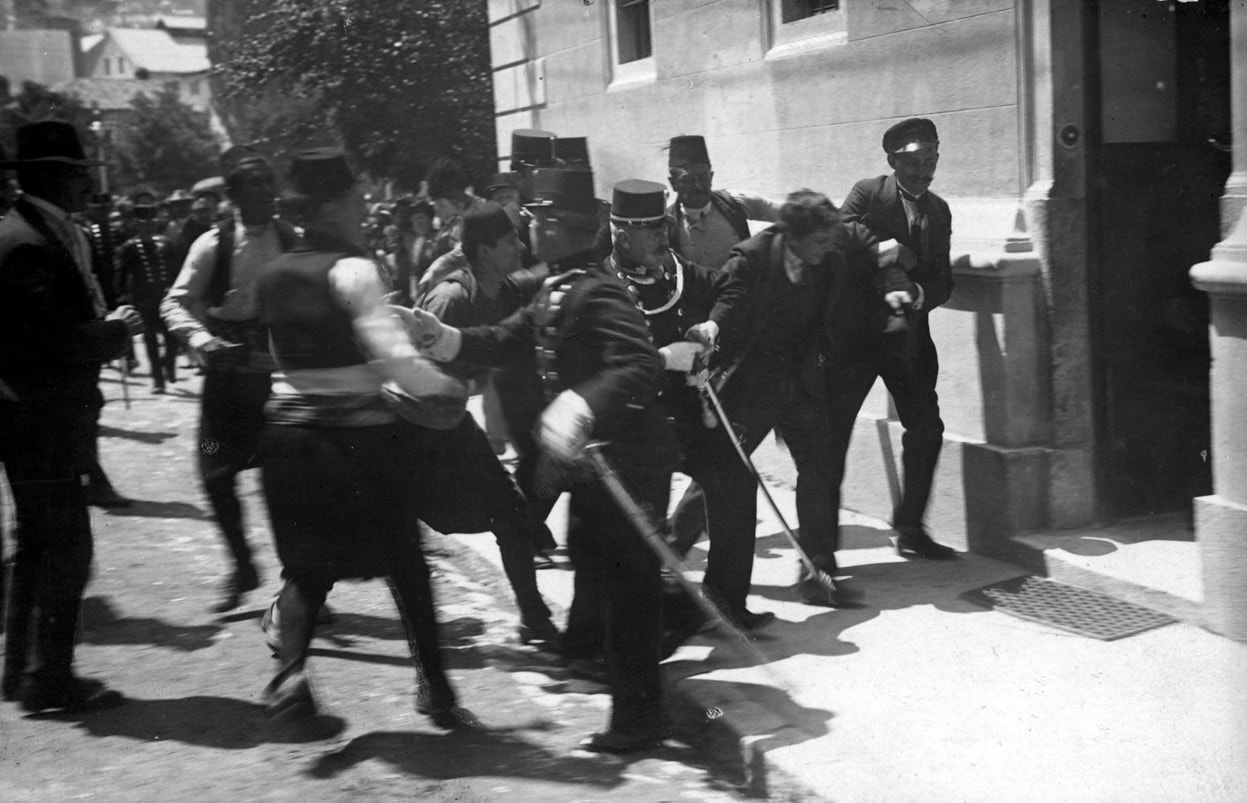 A Bosnian Serb nationalist (often credited as Gavrilo Princip), is captured by police and taken to the police station in Sarajevo, on June 28, 1914, following the assassination of Archduke Franz Ferdinand, heir to the Austrian-Hungarian throne, and his wife. (Photo credit: US National Archives)

Following the arrest of several of the conspirators, including Princip, Austria issued an ultimatum to neighboring Serbia, which led to open warfare between the two countries within a month. The German and Russian Empires, allied with the two warring nations, entered the conflict by August 1914, which soon engulfed almost all of Europe and became the First World War. The domino effect of alliances and counter-alliances brought no less than 32 countries, eventually including the United States, into the conflict. 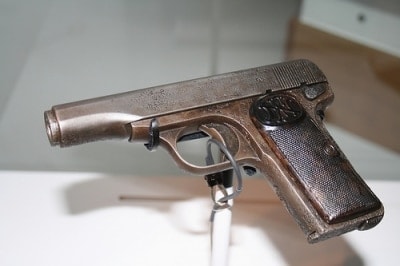 Princip’s gun, a Belgian-made FN Browning Model 1910, serial 19074, was provided through Serbian military intelligence contacts to the shooter. In the custody of an Austrian Jesuit monastery, the gun has been on display at the Military Museum in Vienna since 2004. (Photo credit: Cinque Terre Liguria)

When the guns finally fell silent on Nov. 11, 1918, some 38 million military and civilian casualties had been inflicted and the thrones of Russia, Germany and Austria had all been swept away into history.

Princip himself would not live to see peace in his time, dying of tuberculosis in an Austrian prison just months before the end of the war. He had been sentenced to 20 years imprisonment and was spared the hangman’s noose due to his age, as the Empire’s laws prevented the death penalty to those under age 20.

While many in Sarajevo honor Princip as a hero, some feel otherwise.

“To be honest, I don’t really care about the anniversary,” said Tarik, a 29-year-old web designer, to the The Guardian this week. “I think Princip was a coward who killed a pregnant woman.”

In a sign of closure, the Vienna Philharmonic Orchestra, visiting from Austria, will be performing in Sarajevo. “We feel obliged to do things in a better way than it was done in the past,” said Clemens Hellsberg, president of the orchestra, which will start the concert with the Bosnian national anthem. 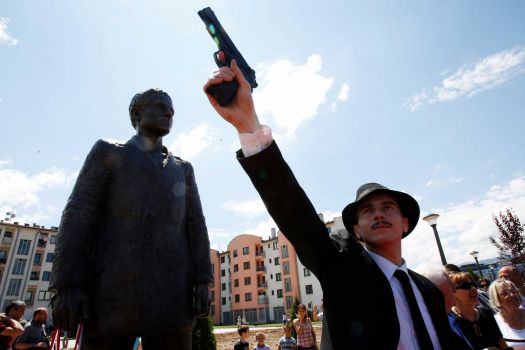