The shell was fired from a historic artillery cannon at the Oklahoma Full Auto Shoot and Trade Show, the local CBS-affiliate reports. It travelled nearly three miles before striking a tree limb and tumbling into Gene Kelley’s home in Wyandotte. 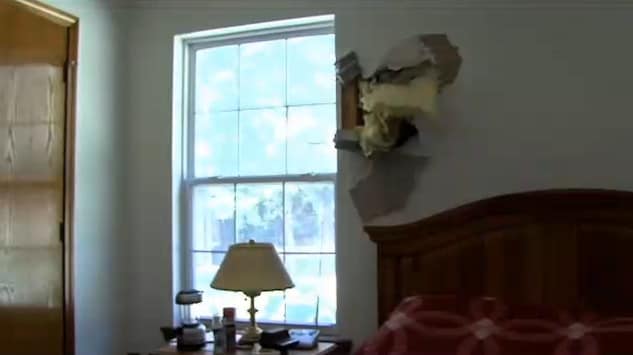 The 105mm shell travelled nearly three miles before ripping through the exterior wall and landing on the bedroom floor.

Kelley and his wife were home when the shell ripped through their ceiling and tore through their walls, and he said he’s just happy “nobody was hurt.”

Mike Friend, owner of Fast Machine Gun Shoot, said it was the first time that particular cannon had been fired at their range, but added they had gone over safety procedures before setting off the ordnance.

“It’s a freak accident because as far as the safety end of everything, we drill every one of our shooters before it ever begins,” Friend said. “We have 30-45 minute drill.”

Kelley said he’s not opposed to firearms, but thinks owning and using a 105mm howitzer may be a bit extreme.

“The people that bring these type of weapons need to think about whether it is really safe and an appropriate area to take a weapon of that magnitude and shoot it,” Kelley said.

The owner of the cannon has agreed to pay for the damages Kelley incurred, and the gun range has said they will increase safety measures to ensure nothing like this ever happens again.