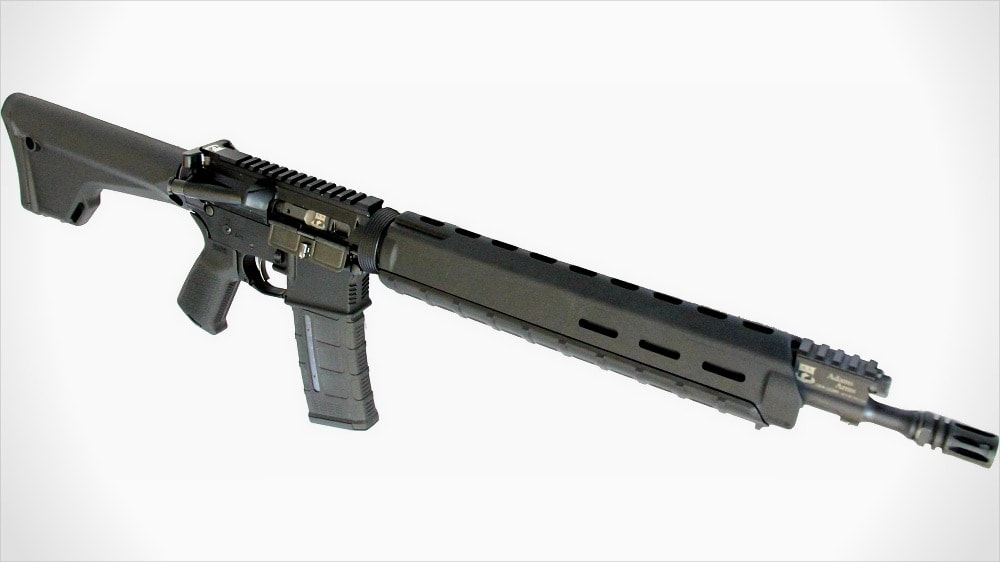 Adams Arms is bringing back an old-school design with a modern take with its new line of Dissipator rifles and uppers. A Dissipator is a carbine-length AR with a rifle-length gas system.

Early takes were made by simply shortening 20-inch pencil rifle uppers down to 16 inches, but these suffered from timing issues and didn’t have the gas pressure to cycle reliably. The idea largely died off.

Recently the design has made a small comeback. These use a carbine barrel with a rifle-length handguard that conceals a hidden low-profile gas block underneath, and a second front sight gas block that’s there to hold the handguards in place. These are often called “mock” Dissipators.

The design is appealing because it provides a much longer gripping surface and extends the sight radius by several inches while maintaining the overall size and maneuverability of a carbine.

Adams Arms is rolling out true Dissipator rifles with rifle-length handguards. By using a 16.5-inch VooDoo Innovations lightweight barrel, a lightweight bolt carrier group and solid engineering, the old concept has been brought back to life.

Of course there are plenty of other upgrades to the design that you wouldn’t see on any original Dissipator. First up is gas piston system.

Adams Arms is well-known for its proven adjustable short-stroke piston system and the Dissipator gets the same treatment. This runs cooler and cleaner and can easily be tuned for more gas to run in adverse conditions or less gas to run suppressed. Because it runs cooler it means that even with a light profile barrel it won’t heat up as quickly and have less point-of-impact shift.

The front gas block is railed for use with back up iron sights and the whole thing is decked out with Magpul accessories. True to the original design Adams Arms’ Dissipator comes with a fixed rifle-length stock, also Magpul. Complete rifles will ship with 30-round PMags.

The rifles and uppers use MIL-SPEC forged 7075-T6 receivers that have been Type III, Class 2 hard-anodized for wear resistance. The uppers are laser-engraved and have T-marks on the flattop receiver.

The barrel is 4150 chromoly steel with 5.56 NATO/.223 Remington chamber and a Melonite finish. Not only is Melonite more wear-resistant than chrome lining, it also yields better accuracy.

It is optics-ready, meaning it comes without sights, which keeps the cost down a bit while giving the user greater flexibility when selecting sights.

The MSRP for these rifles is $1,525 or $821 for the upper alone. Currently they’re only available through the Adams Arms web store but when they hit wider retail channels we expect the prices to come down a bit. Real-world prices for Adams Arms hardware is usually a good deal less than MSRP.

For more details and information check out the Adams Arms Dissipator page, and to stay up-to-date with all Adams Arms news, hit up the company’s Facebook page and Twitter feed.