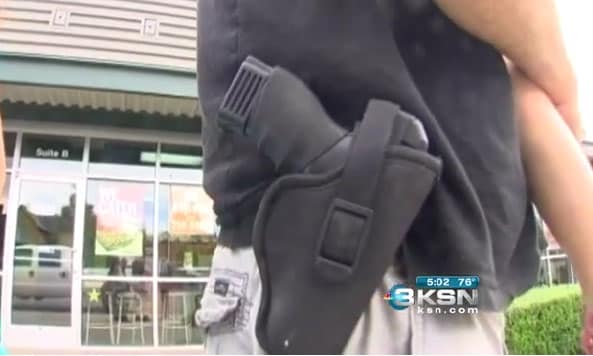 As Americans gear up to celebrate Independence Day, gun rights advocates in at least three states across the country are celebrating their freedom a few days early – the freedom to legally carry a firearm in a few more places, that is. Indiana, Kansas and Georgia all have new laws going into effect Tuesday, all expanding the number of places where a gun may be legally carried.

One piece of Indiana legislation will allow legal permit holders, including school staff, parents and visitors, to have locked guns in their cars in school parking lots. Prior to the change, permit holders picking up or dropping off their children at school could face felony charges for having a gun in their vehicle – even if the act was unintentional.

“Governor Pence believes in the right to keep and bear arms and that this is a common sense reform of the law that accomplishes the goal of keeping parents and law-abiding citizens from being charged with a felony when they pick their kids up at school or go to cheer on the local basketball team,” spokeswoman Kara Brooks wrote in an email back in March when the bill was signed.

But not all residents believe that’s such a great thing.

J.T. Coopman, executive director of the Indiana Association of Public School Superintendents, said, “There’s been so much concern about school security and school safety, so why would we do something that has the potential of easily jeopardizing that with readily accessible guns in cars on school property?”

“I guess my next thought is, are (lawmakers) going to take responsibility for a shooting that takes place as a result of this?” Coopman added. “Whether it be a student or whether it be an angry parent that maybe would have taken other courses of action, had these guns and weapons in cars not been so readily accessible?”

However, Republican state Rep. Jim Lucas, who first proposed the possibility of such legislation this session, doesn’t believe that having guns in locked cars in the parking lot will lead to school shootings because those responsible for school shootings typically aren’t concerned with what the law allows anyway.

In Kansas, new legislation allows firearms to be carried – concealed or openly – in any place across the state which does not have a sign posted stating that guns are not allowed.

Those who support the new law say it brings uniformity to gun laws across the state.

“That’s really the genesis of this bill, trying to create clarity in our state, so whatever the laws are going to be in our state, lets make them uniform across the state,” said District 81 Representative Jim Howell.

In order to carry a concealed firearm in the state of Kansas, residents must undergo training and pay a fee, but open carry is allowed by any person in the state who is legally allowed to own a firearm.

The Georgia Safe Carry Protection Act, dubbed the “guns everywhere act,” will also go into effect tomorrow, expanding the number of places where guns will legally be allowed now, including bars, churches, schools and government buildings.

“Our state has some of the best protections for gun owners in the United States. And today we strengthen those rights protected by our nation’s most revered founding document,” said Georgia Gov. Nathan Deal when he signed the bill in April.

While the bill expands rights for gun owners in The Peach State, it also leaves some leverage for those opposed to the idea as well. Individual school districts will be allowed to decide whether or not they wish to have guns on campus, as will religious leaders have the option of choosing whether to allow those in attendance to tote firearms.

But, of course, the bill was met with some opposition too.

Americans for Responsible Solutions, who called the legislation the nation’s most extreme gun bill, said it “moves Georgia out of the mainstream.” Lucia McBath, spokeswoman for Moms Demand Action for Gun Sense in America said it’s “a very, very dangerous kill bill.”

Nonetheless, Deal reiterated when he signed the bill, “Today I will put into a law a gun bill that heralds self-defense, personal liberties and public safety. While we still guard against tyranny, America today still cherishes this right so that people who follow the rules can protect themselves and their families against those who don’t.”