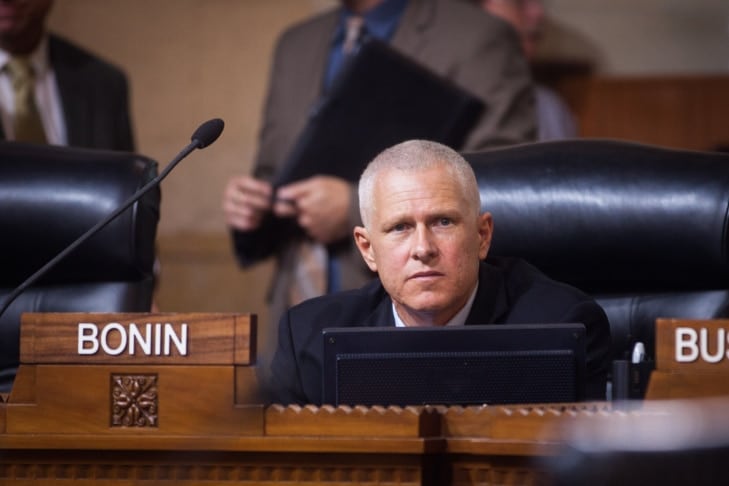 “This is about preventing murder in our neighborhoods,” said L.A. City Councilman Mike Bonin of the city’s plans for a ban on magazines holding more than ten rounds. (Photo credit: Grant Slater/KPCC)

“This is about preventing murder in our neighborhoods and preventing death in streets,” Councilman Mike Bonin, who is on the City Council’s Public Safety Committee reviewing the proposal, told the Los Angeles Daily News.

Council attorneys contend that 42 percent of the mass shootings in the past three decades have involved “assault weapons, large capacity magazines or both.” The ban, with some exceptions, would mandate that high capacity magazines be removed from the city, sold or turned over to police within 60 days of coming into effect.

Bonin voiced that the measure could help address an “epidemic of death and gun violence in this country.”

The committee sent the draft ordinance, submitted on June 26, back to city attorneys to ensure that it would be virtually impregnable to future legal challenges, such as those weathered so far by the similar Sunnyvale and San Francisco bans.

The proposed ordinance would prohibit any magazine capable of holding more than 10 rounds inside the city, which has a population of nearly 4 million. As such, it would target magazines previously classified as “pre-ban” since it does not have a grandfather clause.

Among a series of exceptions would be for .22-caliber firearms with tubular magazines, film props, museum pieces and guns used by armored car companies, law enforcement and the military. Those who do not relinquish or transfer banned magazines would be liable to a misdemeanor penalty.

At least one gun rights advocate made an appearance to voice concerns on the proposed new law for the nation’s second-largest city.

“I don’t know why your energy is spent on law-abiding Californians,” said local attorney Michael Hanna, who testified before the committee. Hanna brought an unloaded magazine to with him to prove a point, saying the council was “trying to criminalize the possession of a metal box with a spring in it.”

The LA law would be the latest in an attempt to codify that magazine capacity, set at an arbitrary limit, does not violate the Constitution by reasoning that when the Second Amendment was ratified in 1791 magazines had yet to be invented. This was the belief voiced by the U.S. District Court in Northern California when they upheld Sunnyvale’s confiscatory magazine ban earlier this year.

Second amendment scholar David Kopel, however, provided powerful argument to this decision. He recently wrote an amicus brief explaining that the first magazine to hold more than 10 rounds came sometime during the late 16th century, and by 1791 the Girandoni air rifle, which came with a 20 or 22-round magazine, was in use.

The Sunnyvale ban is currently being appealed to the U.S. Court of Appeals for the Ninth Circuit.

The LAPublic Safety Committee is scheduled to revisit the draft ordinance by July 27.