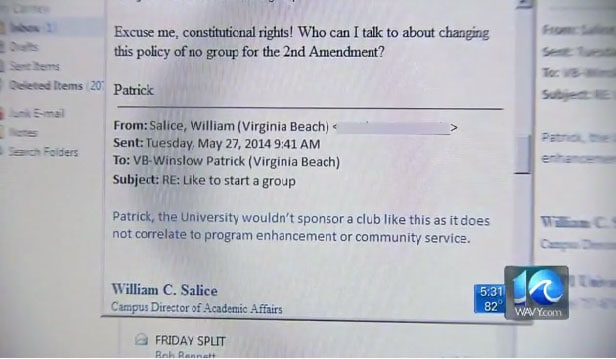 The university’s president says there was a bit more to the initial email that was sent and the entire story is not being told. (Photo credit: WAVY)

When a student at ECPI University in Virginia Beach decided to start a Second Amendment club for fellow students, he never thought it would be denied — or create a controversy. But according to a local investigative report, the school’s president said there’s more to this story — and the denial — than meets the eye.

Patrick Winslow said he wanted to start the club as a means to help educate and inform students and staff alike about “the Constitution, Declaration of Independence, federal and state laws regarding gun control and gun laws and so forth.”

Winslow also thought it would be a good fit with the school’s criminal justice program.

But the response Winslow received from the ECPI Campus Director of Academic Affairs William C. Salice was, in part, “Patrick, the University wouldn’t sponsor a club like this as it does not correlate to program enhancement or community service.”

With that denial, the university is now feeling the heat from gun rights advocates, with some saying that the school has anti-gun double standards.

“I was shocked,” said Philip Van Cleave of the Virginia Citizens Defense League. “It’s a group that would be meeting and talking about the Constitution, the Second Amendment and so forth, and they basically said that’s not a public service. You would hope doing the criminal justice system, they would understand what the Second Amendment is, but maybe they don’t.”

However, ECPI University President Mark Dreyfus said it’s not that simple and there’s more to the story than what’s being told.

“He wanted to start a club with the intent, expressed intent, with changing our policy on the carry law at the institution,” Dreyfus told reporters.

He also said that he wasn’t even aware that there was a problem with the denial until he was bombarded with emails and blog posts.

“It really tells you about the Internet today and what’s out there is not necessarily the truth,” added Dreyfus, who also pointed out that the school offers a program in criminal justice, complete with new technology focusing on gun safety.

Winslow, who admitted he wasn’t sure about the best way to go about starting a club, said he plans to appeal the university’s decision and hopes to perhaps better express the proposed club’s intentions this go around.