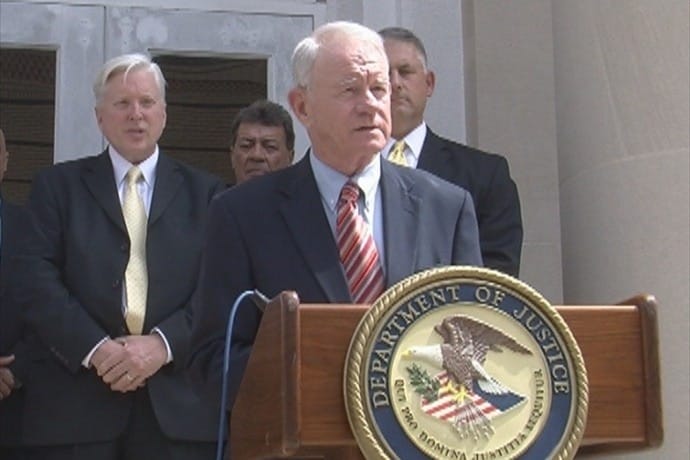 Some 200 guns have been seized and 10 suspects nabbed by federal law enforcement following an eight month investigation at an Alabama flea market.

The U.S. Attorney for the Middle District of Alabama announced the actions Monday after the lengthy Bureau of Alcohol Tobacco Firearms and Explosives operation conducted at Sadie’s Flea Market in Dothan.

“These individuals were either selling to known felons, selling across state lines or were themselves felons in possession of firearms,” U.S. Attorney George L. Beck Jr. explained to the Dothan Eagle.

Beck told media that Sadie’s organizers were not involved directly in the sales and cooperated fully with federal agents in the undercover investigation that began in October 2013.

The investigation included the use of confidential informants, which has proved controversial in other ATF investigations.

Ten men from Alabama, Florida and Georgia, who ranged in age from 27 to 84, were arrested. Of these, nine were charged with selling a firearm to a convicted felon while four were charged with dealing firearms without a license. The violations could carry up to 10 years in prison and fines of up to $250,000 for each charge.

“One of those rules is a person is prohibited from knowingly selling a gun to a felon. That rule is important to protect the citizens because we don’t want guns to get into the hands of those who have committed serious crimes,” Beck said.

According to reports, some 200 firearms as well as 5,000 rounds of ammo were seized by agents.

It has long been the established interpretation of federal gun laws by the ATF that unlicensed gun owners can sell personal firearms to residents of their own state as long as they do not believe the receiver is prohibited from owning guns under federal or state law.

“There’s no problem in selling your firearm, but you cannot deal in the purchase and sale of firearms unless you are licensed to do so,” Beck said.