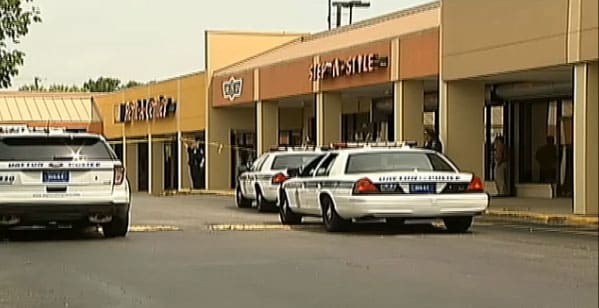 “It concerns me when you are living in the community and you hear about the robberies,” said Darlene Cotton, one of the store’s customers. “I don’t know if it’s the economy, but that’s no excuse. You can’t just go out and rob.” (Photo credit: WHIO)

An attempted robbery of a clothing store in Dayton, Ohio Monday morning turned deadly for one of the teen suspects when the store owner pulled out a gun and fired at him.

At about 11 o’clock the two suspects walked into Step-N-Style with their faces covered and one brandished a gun, local media reported. But the would-be robbers weren’t the only ones who were armed.

The store owner, whose name has not been released, retrieved his own gun and fired a single shot, striking one of the suspects. Both suspects fled, but the one which was shot collapsed in the parking lot.

The store owner then called 911.

“Somebody just tried to rob my store and I killed one of them,” he told the 911 dispatcher. “I shot him. He had a gun.”

There was one customer in the store at the time of the shooting, but neither the customer nor the store owner were injured during the incident.

When police arrived, the suspect was pronounced dead. Some time later, the parking lot became a scene of chaos as the suspect’s mother arrived to identify her “baby.”

Authorities are still searching for the second suspect, who is described as a young black male in his late teens, about 5-foot-6 with a thin build. When he entered the store he was wearing blue jeans, a black sweatshirt and either a white surgical mask or bandana covering his face.

“At this point, it does appear to be self defense, but we are going through a full investigation to determine that,” said Lt. Matthew Dickey with the Dayton Police Department.

Apparently robberies have become common practice in the area.

The store owner says he was robbed by three armed men back in November 2012. The robbers made off with a .40-caliber Glock 23, the store owner’s car keys and store keys, $1,000 in cash from the register, the owner’s wallet and about 200 pairs of jeans. Altogether the lost goods totaled more than $28,000.

And authorities say it’s becoming increasingly common for store owners to arm themselves as the number of robberies continues to increase.

“It’s becoming more common, just because, unfortunately, there’s been a number of robberies in the area over the last several years,” Dickey said. “Some employees and some owners have taken to arming themselves in self defense. It’s a serious decision they have to make.”

Dickey added that he wants everyone to be safe.

“It’s a concern for us in the fact that we don’t want to find ourselves in an armed engagement with store owners,” he said. “When dispatch speaks with them on the phone as the officers are arriving, we give very clear instructions about how to proceed and how we want them unarmed and talking to the officers before they come to the door. We don’t want to have mistaken identities and having extra guns in the situation.”