In April, Mayor Against Illegal Guns and Moms Demand Action merged to create Everytown for Gun Safety and when it officially launched it had a whopping $50 million in the bank, donated by the leader of the gun control movement and former New York City Mayor Michael Bloomberg.

Since the launch, Everytown has advocated for universal background checks, but the group’s views on other topics within the gun debate — assault weapons ban, magazine capacity, concealed carry, open carry, etc — have been unclear. We aimed to fix that.

John Feinblatt, president of Everytown and former chief advisor for policy and strategic planning for Bloomberg, opened up via email in a Q&A discussion about Everytown’s agenda. 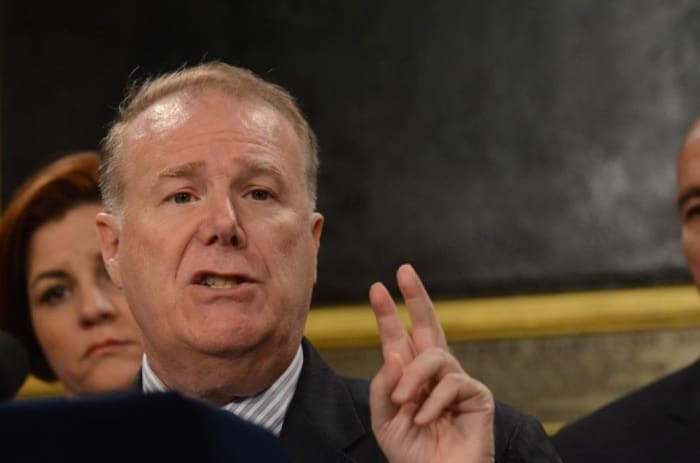 S.H. Blannelberry: All 50 states now have some form of concealed carry, whether it be ‘may-issue,’ ‘shall-issue’ or ‘constitutional-carry,’ where does Everytown stand on this issue? Does it support the right of law-abiding citizens to carry firearms for self-defense outside the home?

John Feinblatt: We have no issue with permitted concealed carrying of firearms when permits are based on common-sense safety standards set by state and local authorities. Our concern is that standards for issuing concealed carry permits vary enormously from state to state. Many states issue permits to individuals with no firearm safety training and to people with convictions for violent misdemeanors and stalking crimes. Some states — including Arizona, Florida and Vermont — allow residents to carry even though they may have never undergone a federal background check. Even more surprisingly, concealed carry permits in Florida are issued by the Department of Agriculture. An investigation by the South Florida Sun-Sentinel showed that they had mistakenly issued permits to more than 1,400 felons including sex offenders and child molesters. If the goal of concealed carry is to be able to defend yourself and others – but dangerous or untrained individuals can get permits, how is anyone safer?

S.H. Blannelberry: There have been a number of studies funded by the government that indicate banning so-called ‘assault weapons’ or magazines that hold more than 10 rounds of ammunition would have (and has had under the Clinton-era AWB) a statistically insignificant effect on crime rates.  Most recently, a 2013 study conducted by Greg Ridgeway, the Deputy Director of the National Institute of Justice, concluded that even “a complete elimination of assault weapons would not have a large impact on gun homicides,” and that without an “extensive buyback of existing large capacity magazines” a ban on them would not be effective. In light of the NIJ study, as well as others that show no positive correlation between AWBs and crime reduction, why does Everytown endorse banning widely popular and commonly owned firearms and accessories?

John Feinblatt: Our focus is on the reasonable reforms that 90 percent of Americans support, such as background checks for all gun sales, keeping guns out of the hands of domestic abusers, promoting the safe storage of guns and giving law enforcement the tools they need to shut down gun trafficking. 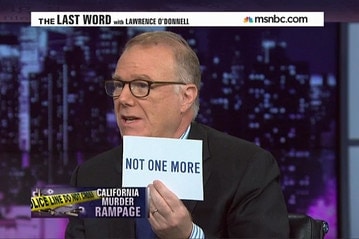 John Feinblatt appeared on MSNBC to discuss the violent shooting in Las Vegas.

While we believe assault weapons and magazine size have the potential to put the ‘mass’ in ‘mass shootings,’ we agree that events like these account for a small percentage of the 86 Americans who are killed by guns every day, which is why we are most focused on the reforms that will prevent the most gun deaths.  We clearly outline our policy priorities on our issues page here including background checks, addressing the role of guns in domestic violence, preventable deaths (child access to guns and suicide) and gun trafficking.

S.H. Blannelberry: Last year a universal background check bill failed to clear the Senate, falling six votes shy of the 60 required to overcome a GOP-led filibuster.  The UBC bill, sponsored by Sens. Pat Toomey (R-PA) and Joe Manchin (D-WV), required background checks for all private gun transfers or sales made via the Internet and at gun shows.   However, there were notable exemptions for temporary transfers and transfers made between family, friends and neighbors.  It also explicitly made it illegal for the government to set up a registry of law-abiding gun owners.  First off, did MAIG fully support this bipartisan bill, even with those exemptions? Does MAIG and Everytown plan on using its political clout and resources to bring a similar bill up for a vote in 2014?

John Feinblatt: Yes and yes.  Everytown for Gun Safety, then Mayors Against Illegal Guns (which continues to operate as a coalition of more than 1,000 current and former mayors), fully supported Manchin-Toomey and advocated hard for its passage. Everytown recognizes that it makes sense for any comprehensive background check legislation to include reasonable exceptions – and we fully advocated for including exceptions for gun transfers between family members and temporary transfers for hunting, target-shooting and self-defense.

We will continue to push to require criminal background checks for unlicensed firearm transfers online and at gun shows because they save lives and keep Americans safer. Background checks have been proven to be effective: since its inception, the system has blocked more than 2 million illegal gun purchases, helping keep guns out of the hands of criminals. But the giant loophole that exempts all transfers by unlicensed sellers considerably weakens its impact. For example, an investigation we conducted in September 2013 showed that 1 in 30 prospective gun buyers on Armslist.com had a criminal record that prohibited them from owning a gun.  Criminals are flocking to unlicensed sources because they know they can get guns there with no strings attached. In fact, a survey of prisoners who committed crimes with handguns showed that nearly 80 percent of them acquired their firearm from a person who was not a licensed dealer.

S.H. Blannelberry: At the end of 2013, MAIG announced that it would be merging with Moms Demand Action for Gun Sense in America to match MAIG’s financial resources with MDA’s grassroots activism. One could argue that this was a strategic move so that both organizations were more equipped or better situated to take on the mighty National Rifle Association. While it’s no secret that both sides of the gun divide are gearing up for a fight in 2014, has MAIG/MDA ever considered trying to negotiate or compromise with the NRA on the issues? For example, would it be possible to strike a deal in which gun owners support a federal UBC bill in exchange for gun-control activists endorsement of the repeal of all laws nationwide that limit and/or ban so-called ‘assault weapons’ and ‘high-capacity magazines’?  In other words, you get UBCs, and we get to keep our modern sporting rifles and standard capacity magazines.

John Feinblatt: We are open to working with anyone who is committed to common sense reforms that will reduce the amount of needless gun deaths in the country. When it comes to the NRA leadership, we would welcome them to join a clear majority of their members who agree that support for Second Amendment rights goes hand in hand with keeping illegal guns out of criminal hands. According to a survey conducted by Republican pollster Frank Luntz, 74 percent of NRA members support criminal background checks for all firearm purchases, 75 percent believe concealed carry permits should only be granted to applicants who have not committed violent misdemeanors, and 71 percent support a proposal prohibiting people on the terrorist watch lists form purchasing guns. In total, 90 percent of Americans support criminal background checks. 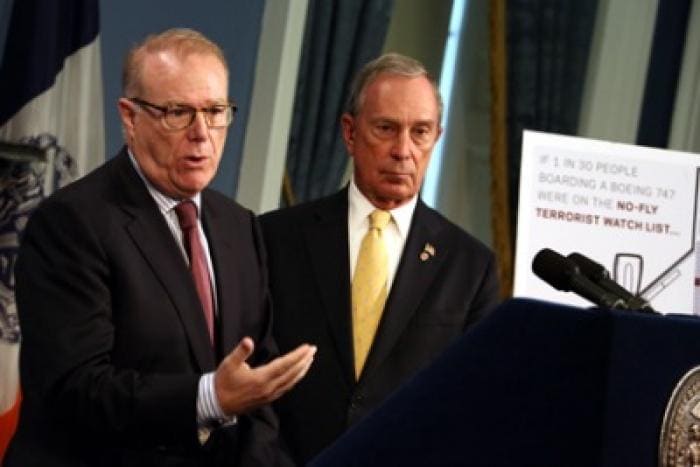 S.H. Blannelberry: Looking at the political landscape, MAIG scored a number of victories at the state level: Colorado, New York, Connecticut, Maryland, California all passed tougher gun laws and Virginians elected pro-gun control gubernatorial candidate Terry McAuliffe, thanks to MAIG’s contributions. Does Everytown expect to have even more success in 2014?

John Feinblatt: Just over a year and a half ago, the mass shooting at Sandy Hook Elementary School opened America’s eyes to our national epidemic of gun violence that kills 86 Americans every day in our country. We will continue to fight to put into place sensible, bipartisan solutions that will save lives without infringing on the Second Amendment. A strengthened background check system will not end gun violence in this country, but it will save countless lives by keeping guns out of the hands of criminals, domestic abusers and the seriously mentally ill.

In just the first half of 2014, Everytown and Moms Demand Action have worked with domestic violence prevention advocates to pass important bills in six states (Minnesota, New Hampshire, Wisconsin, Washington State, Louisiana, and Vermont) that will help keep guns out of the hands of domestic abusers. These measures have been passed by state houses with bipartisan support and signed into law by governors of both parties, including both Wisconsin Gov. Scott Walker and Louisiana Gov. Bobby Jindal.

S.H. Blannelberry: Is there any specific message that Everytown has for gun owners and the gun community?

John Feinblatt: We don’t want to take your guns! With rights come responsibilities, and most gun owners agree that kids and felons should not have access to guns. We want to reduce senseless and preventable gun deaths across the country by keeping guns out of the hands of dangerous people. Too many innocent Americans – men, women and in too many cases children, are being needlessly murdered with guns every day in their homes, their offices, their places of worship, and their schools. Just this week we released a report that shows there have been 100 unintentional child gun deaths over the course of one year, and 70 percent of those could have been prevented with safe storage.

Just like most gun owners exercise responsibility when handling and storing guns, many support common sense measures to reduce gun violence. These solutions, something as simple as a background check, can reduce shootings and enhance everyone’s personal safety and security without infringing on the Second Amendment. If you are a proud gun owner and tired of daily reports of needless killing by criminals misusing guns, then please join us as we fight to reduce gun violence.  We’re on the same side.

Thanks to Mr. Feinblatt for taking the time to answer the questions.