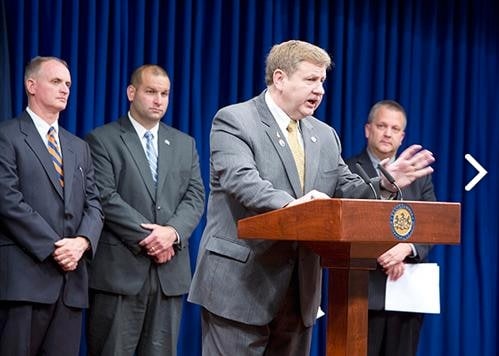 Rep. Rick Saccone, at podium, has proposed one of three bills taking aim at the state’s ban on semi-auto rifles for hunting. (Photo credit: Pittsburgh Tribune-Review)

No less than three bills are being pushed through the Pennsylvania state legislature to end the total ban on hunting with semi-automatic rifles in the Keystone state.

Only one other state, Delaware, currently prohibits the use of all semi-automatic rifles to take game. While semi-auto shotguns are allowed under Pennsylvania laws, all rifles must be manually operated.

This often forces hunters into using one rifle for home defense and target shooting, and a different one for sports shooting.

“We have a lot of money tied up in these guns, and it kind of stinks that all we can do with them is target shoot and plink at the range all day,” Nate Jacoby, an avid Pennsylvania hunter, told the Pittsburgh Tribune-Review. “We’re really behind a lot of other states on this thing.”

However three different bills in the state legislature aim to fix this problem.

The most ambitious of these is House Bill 2333, which would legalize semiautomatics for all hunting in Pennsylvania. The simple two-page bill’s only limit would be to mandate a 10-round magazine capacity during hunting. This would allow both small and large game sportsmen in the state to take animals during the same seasons open to those with manually operated rifles.

“A semiautomatic firearm simply is one that holds multiple rounds of ammunition. The trigger must still be pulled every single time the gun is fired,” read a statement from Rep. Rick Saccone (R-Washington/Allegheny), the bill’s sponsor.

“In my bill, gun magazines would be limited to 10 rounds. The advantage of a semiautomatic rifle to a hunter is that it becomes unnecessary to stop and reload if one fires and misses, allowing for a greater chance of harvesting game,” Saccone continued.

Saccone’s bill is currently under review by the state Senate Game and Fisheries Committee.

A more restrained move against the ban on repeating rifles in the state is House Bill 2230, introduced in May. This measure would only allow the use of rifles .223-caliber and under for hunting varmint species such as coyotes, foxes and woodchucks. Likewise, it mandates a magazine capacity of no more than six rounds. The legislation has passed the House Game and Fisheries Committee.

The third attempt at legalizing semiautomatics in Pennsylvania is Senate Bill 1402. This bill, unlike the others under consideration, imposes no limits on magazine size but only allows for exemptions for the use of these rifles to take coyote and woodchuck, and then only when not overlapping regular deer, bear and turkey seasons.

This final measure is currently seen as having the most steam behind it, after first garnering the support of the Pennsylvania Game Commission then passing the Senate Game and Fisheries Committee on June 11, 2014, in a unanimous vote.

Some hunters in the state, however, contend that the use of semi-automatics would make the sport less safe.

“I have a right to be reasonably safe while hunting with my family, and being exposed to barrages of gunfire from firearms designed for police work and warfare is a reckless hazard that cannot be allowed,” wrote James Morabit, a self-professed hunter, to the Pittsburg Post-Gazette.

Gun rights groups are supporting the measures, with the National Rifle Association maintaining, “These bills would allow hunters to be in accordance with many other states in how they control harvest of varmints and predators.”

Should the legislation succeed, it will be the third time this decade that laws banning the use of semi-automatic rifles for hunting were repealed. In 2010, both Washington and Maryland did away with similar restrictions in those two states.

The trio of bills are set to be considered in the coming weeks by the Pennsylvania legislature and, if adopted, would be the first time since 1907 that the use of any but manually operated rifles would be legalized in the state.