Breaking: Target 'respectfully' says no guns in our stores 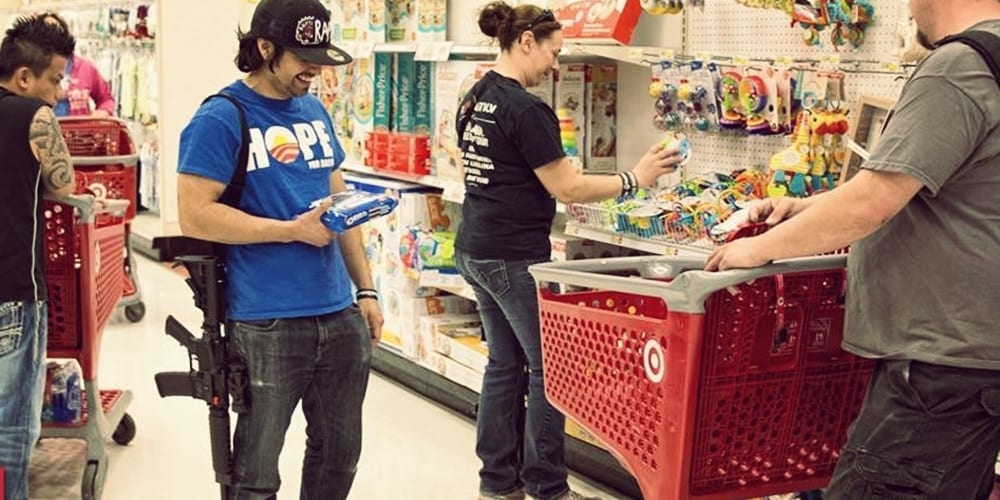 One of the beginning photos of open carriers inside Target.

As the tug and war battle between Open Carry Texas and gun control groups continues, another national chain gave way. The retailer Target asked that open carriers leave their guns at home on July 2.

“As you’ve likely seen in the media, there has been a debate about whether guests in communities that permit ‘open carry’ should be allowed to bring firearms into Target stores. Our approach has always been to follow local laws, and of course, we will continue to do so,” said John Mulligan, Target’s interim CEO. “But starting today we will also respectfully request that guests not bring firearms to Target – even in communities where it is permitted by law.”

“We’ve listened carefully to the nuances of this debate and respect the protected rights of everyone involved. In return, we are asking for help in fulfilling our goal to create an atmosphere that is safe and inviting for our guests and team members,” Mulligan continued.

“This is a complicated issue, but it boils down to a simple belief: Bringing firearms to Target creates an environment that is at odds with the family-friendly shopping and work experience we strive to create,” he added.

Moms Demand Action — which has pushed Target to choose a side since early June — was quick with the press release praising the retailer’s response.

“Moms are thankful that Target responded quickly to the call of nearly 400,000 Americans and asked customers to keep their firearms at home,” said Shannon Watts, founder of MDA. “Moms everywhere were horrified to see images of people carrying loaded assault rifles down the same aisles where we shop for diapers and toys. Like Chipotle, Starbucks, Facebook, Jack in the Box, Sonic, and Chili’s, Target recognized that moms are a powerful customer base and political force – and you can respect the 2nd Amendment and the safety of customers at the same time.”

In response, OCT said it will respect Target’s decision, but continue to support its own cause for making the open carry of firearms, in most respects, legal in Texas.

“While this is not a ban on legally possessed firearms in its stores, we will continue to honor our months long policy of not taking long arms into Target stores or any other business,” the group said via Facebook, adding, “Engaging in the businesses of interfering with or making a scene at private corporations is something to which Open Carry Texas has never lowered itself, a practice we will maintain,”

“Open Carry Texas is laser focused on our statewide goals of making Texas the 45th state to recognize the right to openly carry firearms and the 32nd to do so without a licensing requirement,” OCT said.

The Coalition to Stop Gun Violence, a pro-gun control group, shared Target’s response with the message, “VICTORY! Target changes their gun policy,” and said it its followers, “Thank you for helping to create this change by taking your concerns directly to Target leadership.”

Target, which raked in $72 billion in revenue in 2013, is one of a handful of companies caught in fight for hearts and minds. So far Chili’s, Jack-in-the-Box, Sonic, Chipotle, and Starbucks have all favored no guns in the public’s eye.